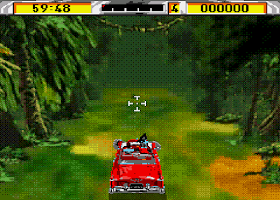 Genre: Action
Perspective: Behind view
Gameplay: Rail Shooter
Setting: Post-Apocalyptic
Published by: Rocket Science Games
Developed by: Rocket Science Games
Released: 1994
Platform: SEGA CD / Mega-CD
Quite unusual and curious game Cadillacs and Dinosaurs: The Second Cataclysm, mostly performed in 3D using FMV. Most of the game is animated.
Due to the global climate catastrophe in 2020, humanity hid under the earth. When people came to the surface, they did not recognize the world. They ended up in a new era of Xenozoic. The world has reincarnated, new beings have evolved, dinosaurs began to wander everywhere and some Scharnhorst appeared, they want to make a new catastrophe. Hoping that everything will come back, the new mysterious race of Grith chooses Jack Tenrec and his partner Hannah Dundee. They have to drive a long distance on their Cadillacs in 1953. It is equipped with an automatic machine, as in the game Vigilante 8 on cars. And all this in order to discourage the actions of Scharnhorst.
‹
›
Home
View web version