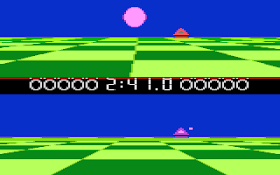 Genre: Action, Sports
Perspective: 1st-person
Visual: Sci-Fi / Futuristic
Published by: Atari Corporation
Developed by: Lucasfilm Games LLC
Released: 1987
Platform: Atari 7800
3097, the point of zero gravity in the dual star system Kalaxon and Kalamar. On the smooth surface of an artificial asteroid is the final round of the Interstellar Championship for Ballblazer - the greatest space tournament of all time! For the first time the creature from the planet Earth broke through all the qualifying rounds and won the right to represent your nation in the final of the tournament!
Ballblazer - futuristic sports game, in the manner of space football, simple and fast. For its time, the game is revolutionary, and that's why. The screen is divided into 2 parts, each of which shows the playing field as seen by the player and his opponent. The graphics are quite smooth, and does not cause any complaints. Two boats try to score a ball into the enemy's moving gates. Sound and music are also beyond praise.
Hit the friends with your erudition. The playing field in Ballblazer consists of 1155 squares.
Atari 7800: The game is identical to the version for the Atari 5200. Became more expressive Ballblazer and added a demonstration mode. The sound capabilities of the 7800 are far from perfect, therefore, the Pokey chip was installed in the cartridge, the one that can be found in the Atari 5200, Atari 8bit and early arcade games from Atari.
Work on Ballblazer was completed in 1984, but it was released three years later.
‹
›
Home
View web version