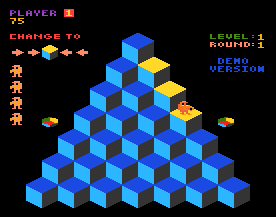 Genre: Action
Perspective: 3rd-person
Gameplay: Arcade
Published by: AtariAge
Released: 2007
Platform: Atari 7800
The early 80's shot brilliant games, almost every month. Q*Bert is one of a whole galaxy of great gaming solutions. You need to paint each area of the pyramid in a certain color, then you can go to the next stage. At the first level, you only have to step one time, but at higher levels you have to jump several times on each square! I do not advise you to walk past the pyramid, or to fall into the clutches of dangerous creatures! Q*Bert is a classic of the genre, though not an obvious hit. A bird with a strange name Q * Bert paints squares, jumping from one to another. In this game, which came to us explicitly from another dimension, even simple monsters have their names, for example, Coily - a snake, Slick and Sam - green creatures.
On the Atari 7800 game ported Ken Siders. B*nQ is as gorgeous as the arcade original Q*bert. Excellent graphics, all characters, a screen with instructions and records and even demos between levels! The sound is transferred all (if possible), the platform 7800 is not able to produce some sound effects from those that were in the original. For example, there are clicks that were generated electro-mechanically in the gaming machine. Voices A7800 also fails to generate.
Interestingly, for Ken Siders this is the second game, ported to the systems of the past. The first was Beef Drop, a clone of Burgertime.
‹
›
Home
View web version