Alone in the Dark: The New Nightmare (PS1) 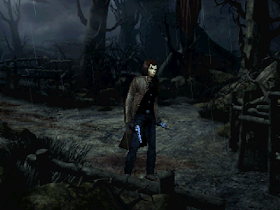 Before swap CD, save state to file, next CD, upload save state file.
Genre: Action
Perspective: 3rd-person
Visual: Cinematic camera
Gameplay: Puzzle elements, Survival Horror
Narrative: Detective / Mystery, Horror
Published by: Infogrames
Developed by: Darkworks S.A.
Released: 2001
Platforms: PlayStation (PSX, PS1), Game Boy Color (GBC)
Looking for a flashlight beam instantly illuminates a dark corridor, which is floridly decorated in a Victorian style and is strewn with dusty rows of books. As a weak circle of light moves around the perimeter of the room, a single figure moves forward along the carpet, looking out for objects of interest. Attracted by a moving beam, a formless figure appears in the field of view. She threw herself on the hero with a lantern, leaving him no opportunity for self-defense. As the camera pulls back to fix the hero's defeat, it's already clear that Alone In The Dark The New Nightmare is the most ambitious development in the horror genre ever since the zombies from Resident Evil appeared to terrorize the Raccoon City.
At first glance, Alone In The Dark The New Nightmare seems like a rough mix of the individual elements of Silent Hill and Resident Evil, but it's worthwhile for you to see the game in action, as you quickly make sure it's a mistake. French developers DarkWorks created a game that could well set new standards in the genre of Survival Horror. In game terms, this game is on the heels of one of the two selected heroes, which explores the mansion, looking for weapons and items necessary to withstand the menacing plans of darkness. But here there is an addition that highlights Alone In The Dark IV The New Nightmare from the whole mass of its horrible relatives - this is a successful use of lighting that is skillfully integrated into the eerie atmosphere of the game. Justifying its name, this game unfolds in front of us a number of sparingly lit rooms. A player armed with an unusual arsenal of weapons and a flashlight must slide a beam through dark rooms, searching for the trinkets, lurking enemies, or an occasional light switch. The resulting effect is similar to the episode from The X-Files, when dark rooms conceal in themselves invisible, only occasionally flashing horrors, which further adds anxiety and tension to the general atmosphere of expectation. Although this sounds like a recipe for disaster, the result is very convincing, given realistic lighting effects and elaborated up to the implausibility of the details of the room. All together, this creates one of the most gorgeous graphics games ever seen by the PlayStation Game Console. The plot of the game is mesmerizing, and the action of your heroes, in this world will not let you get bored.
‹
›
Home
View web version