Alone in the Dark: The New Nightmare (GBC) 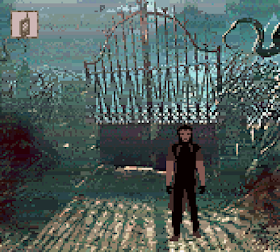 Genre: Action
Perspective: Bird's-eye view
Gameplay: Puzzle elements, Shooter, Survival Horror
Narrative: Detective / Mystery, Horror
Published by: Infogrames
Developed by: Pocket Studios
Released: 2001
Platforms: Game Boy Color (GBC), PlayStation (PSX, PS1)
One of the best games on the Game Boy. Both in terms of graphics, and in terms of gameplay. As you can understand from the name, this port is the fourth part of this game. The series itself is the pioneer in the western market of video games of the genre Horror, or in a simple way horror film. The hero is very smoothly drawn, and the backgrounds are simply gorgeous. Fights with enemies can remind you of the Parasite Eve series, except that they are not step-by-step. The game has a lot of dialogues, explaining the essence of what is happening on the screen.

The plot develops in the spirit of classical, Lauravian horrors. Charles Fiske, friend of the protagonist Edward Carnby, was killed. Carnby begins an investigation and follows the trail, which leads him to an old house on the coast. But Carnby goes there not alone, but with a girl with whom, however, parted after the breakdown of the aircraft, which brought them to their destination. Edward gets acquainted with Edenshaw, who told him about Charles's intention to find three ancient tables, with the help of which it would be possible to release a mysterious "unprecedented and terrible force". The intention did not come true, Charlie dies. Edward wanted to take revenge and uncover the mystery of the fatal tablets.
‹
›
Home
View web version