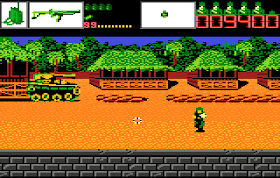 Genre: Action
Perspective: 1st-person, Side view
Gameplay: Arcade, Shooter
Setting: Sci-Fi / Futuristic
Published by: Atari Corporation
Developed by: Atari Corporation
Released: 1990
Platform: Atari 7800
In the story, Alien Brigade - the continuation of the game Planet Smashers, but the fighting unfolds on Earth. Some soldiers in military units began to behave strangely, even atypical for people. Your investigation revealed a terrible fact: the aliens from another dimension invaded Earth! They subordinate the minds of soldiers, turning them into dangerous zombies. Worse still, some newcomers take over the bodies of soldiers and civilians, people disappear every day. The worst was revealed later. Aliens have weapons that can turn the entire population of our planet into zombies! Despite the fact that it is difficult to distinguish a zombie from an ordinary soldier, and the aliens well guard their objects, you decided to try to save the inhabitants of the Earth. Over five levels, you have to shoot strangers, save hostages, collect weapons and survive under a hail of fire!
Alien Brigade - one of the few games for the Atari 7800, using a light gun.
The game is made at the modern level, the animation I have evoked sympathy, the gameplay is pleasant. This is an excellent addition to the collection of games Atari 7800!
In another way this game was called Combat Gun
‹
›
Home
View web version