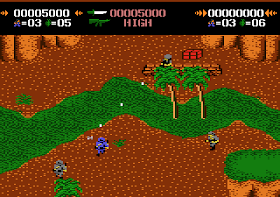 Genre: Action
Perspective: Top-down
Visual: 2D scrolling
Gameplay: Arcade, Shooter
Published by: Atari Corporation
Developed by: Capcom Co
Released: 1989
Platform: Atari 7800
You are alone, on foot, armed with a machine gun and grenades must pass through the jungle and crowds of enemy soldiers. And why, you ask? In Nicaragua, during the secret operation of the CIA, the communist-minded Sandinista, captured 64 of your comrades-in-arms, the Kontrovtsy. And you know perfectly well what they do in Nicaragua with uninvited guests. I advise you to hurry and save them! The future of Nicaragua is in your hands.
Commando is based on the arcade Japanese game Commando, representing a vertically moving shooter from 1985. There was also a game on Amiga, Amstrad CPC, Apple II, Atari 2600, Atari 7800, Atari ST, Commodore 64, MSX, NES, PC, ZX Spectrum.
Commando is one of the most exciting action games in the Atari 7800 library. The gameplay is reminiscent of Rambo or Ikari Warriors. The yellow blood of the soldiers and the dismal schedule made me less impressed. The enemy soldiers are another matter. Bullets fired from their submachine-guns fly a little faster than you can run, so you can dodge bullets and shoot all around like crazy! It's bad that there is no simultaneous play together and management is not so pleasant. Commando is one of two games for the 7800, using the power of the Pokey sound chip.
‹
›
Home
View web version