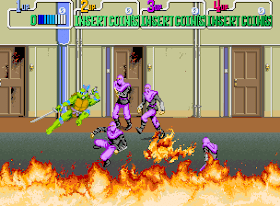 The player chooses one of the four turtles: Leonardo, Michelangelo, Donatello, and Raphael. Then Shredder kidnaps the friend of the turtles, April O'Neil and her mentor Splinter, who must hunt, save their companions, and defeat the evil Shredder. Up to four players (two in some versions) can take control of any of the turtles. Donatello has slower but more far-reaching attacks, Michelangelo and Raphael have fast but short-range attacks, and Leonardo is a well-balanced tortoise, with a speed and medium range.

The arcade version of the Ninja Turtles is included as hidden bonus in the game Teenage Mutant Ninja Turtles 2: Battle Nexus for PlayStation 2, Xbox and GameCube. In this version the music has been altered as well as the majority of the voices.
‹
›
Home
View web version