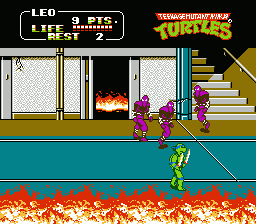 Genre: Action
Perspective: Side view
Visual: 2D scrolling
Gameplay: Arcade, Beat 'em up / Brawler, Fighting, Martial Arts
Published by: Ultra Software Corporation
Developed by: Konami Co
Released: 1990
Platforms: Nintendo (NES), Arcade Machine
Game with trainer.
The second part of the turtle adventure on the NES came straight from the arcade machines. She appeared in front of us is not in the form of a platform, but as popular in the arcades beat'em up genre. Now we can play together. Select your favorite turtle and did chop minions Shredder, step by step, moving to him. Drawing from the first part noticeably prettier. Made the game is entirely on the animated film of the year 1987. The whole atmosphere, the heroes and villains are taken out (although there are bosses, invented by developers) between the stages have a short story insertion. Apart from the usual bumps, the characters have special moves for each identical. The complexity is quite decent. In general, Ninja Turtles 2 Play a fun and memorable stay.