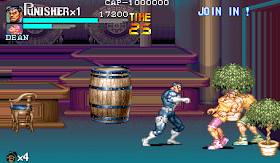 Genre: Action
Perspective: Side view
Visual: 2D scrolling
Gameplay: Beat 'em up / Brawler
Published by: Capcom
Developed by: Capcom
Released: 1993
Platforms: Arcade Machine, SEGA Genesis / Mega Drive
It is the only arcade videogame based on the Punisher, popular anti-hero comics Marvel Comics, and in the game itself are various characters and settings of the work on paper.
After the great success obtained with the title Final Fight Capcom tried to make the most of the engine of this game to produce other fighting games similar, leaning also to the world of comics as in this case and in the case of Cadillacs and Dinosaurs, released the same year .
In 2002, All-In Co. made a bootleg of the game for the Chinese market named Biaofeng Zhanjing, an unofficial version that used sounds taken from Final Fight.

Frank Castle, a former US marine back from Vietnam, sees his family massacred by a mafia clan led by Bruno Costa, intent on a regulation of accounts: the event will turn him into the Punisher, a violent vigilante who lives in the aim of revenge, helped by Nick Fury and the S.H.I.E.L.D. organization.
He will find at his expense that Costa is nothing more than a small fish in that ocean that is the New York underworld, primed by the ferocious Kingpin.

The Punisher presents the same gameplay of other Capcom titles as Final Fight and Captain Commando, with the only variant that the characters that can be used are only two (the Punisher and Nick Fury), and with the same set of moves: it is easy to guess that the effort of the company has focused on the breadth of the set of moves itself, which presents a large number of variants; combining the two buttons (attack and jump) you can perform combos of fists, rotating kicks, kicks with somersault, flying kicks in suspension and glide, rolling on the ground and attack with a hammer, grab the opponent and beat or project it with two different types of grips, perform a piledriver or throw the opponent in jump. There is the classic special move of the Capcom fighting game, which is a technique that can be performed by pressing both buttons at the same time that allows the protagonist to land all the opponents around him but sacrificing energy; this technique can also be done while grabbing the opponent, with the hero grabbing the enemy by the legs and spinning him before hurling him.
During the game you can collect various weapons to be used against enemies: among these you can collect grenades that the player accumulates, and can be used by pressing both buttons simultaneously during the jump or when the player has very little energy.
Another new feature introduced in the game is the presence of phases of the game itself during which the character guided by the player draws a gun and with the attack button fires on the enemy indicated by a viewfinder, automatically positioned by the CPU.
The player can interact with different elements of the scenario, and has the ability to smash parked cars or break windows.
The player has three lives, and every life provides energy, recoverable thanks to the food that can be found along the way. It is possible to continue a game ending by inserting a new credit: in the end of the game with the countdown you can see Microchip desperately trying to revive the Punisher or Nick Fury.
In the Japanese version of the game the special football techniques that provide blood spill to the opponent hit have been changed, presenting a blue flame to the foot of the character, with the enemy struck that ends up wrapped in blue flames.
The game consists of six levels, and if you end the game itself without ever continuing with new credits you will witness an alternative ending. At the end of the third level you can access a bonus clearly inspired by Street Fighter II, in which with the gun you have to eliminate all the barrels that fall from above. Analyzing the source code of the game it turns out that there is a hidden level, probably a bonus, set inside an airplane, in which there are many hostesses to be released: it could be an incomplete level and therefore not accessible by the player, but included in the code of the final product.

The game begins with the Punisher who raids into a bank during a robbery by the men of Bruno Costa; subsequently the pursuit of the same Costa takes the hero on board a bus seized by the criminal's henchmen; you face enemies of various types, including some karateka in gi. The boss at the end is Chester Scully, a character really present in the comic in episodes 22 and 23 of August and September 1989: he is an energumeno with excellent skills of agility and some knowledge of martial arts, but always quite predictable in his attacks; once defeated, he will reveal the location of the home of Bruno Costa, or the Pantaberde castle in Florida; if the player leads the Punisher, he will shoot Scully after the revelation, with a pistol shot (but without succeeding in killing him, as will be discovered later); if Fury is used, the latter will simply knock it out with a kick.

The Punisher raids the building of Costa through the drainage duct of the pool in the garden of the building. The player will have to get rid of several enemies both outside and inside the villa, among these three curious kunoichi armed with a katana (who will return in successive levels, even several times) and the well-known mobsters stooges of Bruno Costa, who report the names also in the comic strip: in fact there are Luis Allegre, Hannigan, Kolsky and Skinner in the game. Once Costa is put with his back to the wall, he is killed in the general amazement of the laser beam of Guardroid, a huge android programmed by Kingpin to eliminate Costa, considered useless, and the Punisher: it will be the boss of the level.

War on the coast

To steal Kingpin, the Punisher tries to put the sticks between the wheels in his trades: in the third level you fight at night in an area of ​​the port against numerous gangsters. At this level for the first time appear the Pretty Boy and the Pretty Head, members of the Reavers, a clan of cyborg criminals. The boss of this level, Bonebreaker, is also one of the Reavers; it is dealt with in a port warehouse; it has a flamethrower as its main weapon and can fire rockets from the crawler part of the body.

Death on the tracks

The subsequent goal of S.H.I.E.L.D. it is a locomotive that acts as a mobile headquarters for Kingpin's drug traffics, shuttling between underground fields and warehouses. The level is set on the rails and on board the train. The boss of the level is Bushwacker, a mercenary armed with a cybernetic arm that can be transformed into a cannon; he is able to perform the Spinning Clothesline by Mike Haggar, a character from Final Fight and other Capcom bouts; at the end of the fight the train explodes.

Kingpin explicitly asks his stooges to bring him the head of the Punisher (or Fury, or both if they play in two), who break into the hero's hideout. The struggle takes place in the sewers that conceal Castle's hiding place; at the end it comes out in a forest. The final boss is Guardroid2, much more powerful, fast and skilled than the Guardroid boss of the second level, and in this case it is always supported by various enemies.

The last level is the den of Kingpin, a huge skyscraper named "King's building", in which the protagonist raises from the top floor by opening a hole in the wall with a bazooka. We continue along a corridor - at the end of which we must support a new confrontation with Chester Scully, who will really die this time - and then jump on the top of an elevator, where Mosaico will face: he looks different from the comic strip (he dresses like a paramilitary ) and with an apparently less important role. Then you go into the room where you check the elevators, then puncture the floor with grenades and go down to the room where Kingpin is. Kingpin himself is the final boss; after his defeat the building collapses and the Punisher and Nick Fury flee aboard a van; a final note shows the number of enemies killed and the fact that Kingpin's body was not found.
‹
›
Home
View web version