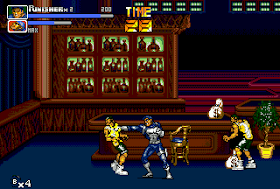 Genre: Action
Perspective: Side view
Visual: 2D scrolling
Gameplay: Beat 'em up / Brawler
Published by: Capcom U.S.A.
Developed by: Capcom Co.
Released: 1994
Platforms: SEGA Genesis / Mega Drive, Arcade Machine
The action was made in a certain link to the eponymous film with Dolph Lundgren in the title role and turned out to be quite good. But in tension
Action to him before the film is far away. There are many kinds of enemies and weapons. Music at the middle level. You can play together.
Mafia-ridden blast killed the wife and son of a policeman, Frank Cassel. For most of the surrounding Frank also died - the Punisher appeared, mercilessly punishing those criminals whom the police can not or do not want cope.

A - a blow.
B - a jump.
Forward, forward - tackle.
During a series of strokes, quickly press left / right - the turntable.