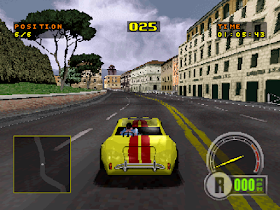 Genre: Racing / Driving
Perspective: 1st-person, Behind view
Gameplay: Vehicle Simulator
Vehicular: Automobile, Street Racing
Published by: Infogrames
Developed by: Pitbull Syndicate Limited
Released: 1999
Platform: PlayStation (PSX, PS1)
Unlike its previous versions, Test Drive 6 has a new career mode in which all participants in the race make money bets, and then drivers who have won prizes get their reward. On the racing tracks now there are interactive elements and alternative paths, which allow a great reduction of the route. As for the car fleet, here it is divided into price categories, and to any car it is possible to purchase new spare parts, thereby strengthening its driving performance, and hence the chances of winning.

When driving in different modes and competitions, you have to deal with the oncoming traffic. Press the horn to release the road immediately. Although sometimes an inexperienced driver with a fright can crash into you.
To effectively perform a high-speed turn on a complex section, do not reset the speed at the entrance to the turn, but just slap the button of the hand brakes lightly and perform the maneuver famously.
Get more speed to successfully jump over cars, in case of an unpredictable situation at the crossroads.
In this game it's quite easy to deal with any rival on the track, you just need to ram his car from behind, and he immediately gets into something, or even flies into the air.
Playing as a policeman, first of all attack the leader of the gang, all the others usually move slower, and they are easy to deal with.
To choose the best car, pay attention to its cost. Of course, that machine that costs a million dollars will be the best. When you completely improve it, it can accelerate to 60 miles in just one second.
To set a speed record, go to Paris. There, on the track after the first two sharp turns carefully, go for smaller turns, and then on a long straight can develop a maximum speed exceeding 270 miles per hour before reaching the next turn.
When you enter a steep turn at high speed, you can fly off the track, lose speed or even make an accident, as a result of which you will noticeably lag behind and lose your place in the race. To avoid this, release the gas completely in the middle of the turn before the slippage begins. When the car starts to slide, do not panic, and immediately press the accelerator and regain control of it again. Align it on the track and you will be able to gain maximum speed much faster than if you try to pass the same turn at maximum speed.
When you finish all the races of Capture The Bomber, go to the track in Hong Kong and use the police car TVR Cop Car. Before the race begins, dial the turns so that the pointer is just below the red field. Then give full throttle when the starter screams "Go!", You perfectly take the start, avoiding the slipping of the wheels. Go to the left of the Bomber, and when you get close and will be a little behind, try to knock him off the road with a side impact. You have to deal with it literally in 4 seconds, then get 2500. If the first try fails, repeat it again.
When driving in the Challenges or any other modes in which there is a oncoming traffic, click on the horn to allow the oncoming cars to get out of your way in a timely manner. However, note that sometimes the driver of the oncoming car can panic and crash right into you.
"No wonder the best car is sold for $ 1 million." When it is completely refined, it accelerates from its place to a speed of 60 miles in almost one second. If you want to set outstanding speed records, go to Paris for the race. After two sharp turns, try to accelerate to 270 miles on an almost straight stretch of the track and keep in mind that then a sharp turn follows.
When entering a sharp turn at high speed, you can fly off the track, lose speed, and at the same time and position in the race. To prevent this from happening, completely flush the gas in the middle of the turn and do not panic if the car starts to lightly inflate. When the car starts to drift, again add speed and completely restore controllability. Level the machine on the track and give full throttle. At the same time, gain speed and save your position in the race, and more often, and go forward.
‹
›
Home
View web version