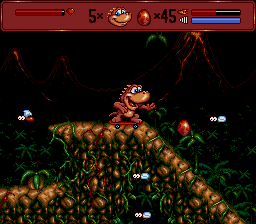 Genre: Action
Perspective: Side view
Visual: 2D scrolling
Gameplay: Platform
Sport: Skateboarding
Setting: Prehistoric
Published by: Activision
Developed by: Beam Software
Released: 1994
Platforms: SEGA CD / Mega-CD, SEGA Genesis / Mega Drive, Super Nintendo (SNES)
Funny game Radical Rex in which you have to play for a small dinosaur Rex. Which is not so helpless as it seems. Tyrannosaurus has a good skateboard, and for protection, he has several techniques. He spews flames from his mouth, can kick, and also do a crushing roar (roar). All this he will need in order to free his girlfriend Rexanne and free the land from the evil sorcerer Sethron. On his way there will be enchanted dinosaurs, sea creatures and other monsters. At the end of the whole game you have to fight the last boss, Strohn. In the version of the game Radical Rex for Super NES, his name is not Sethron, but Gopher.
Initially, when developing the game, they wanted to call it Baby Rex.
‹
›
Home
View web version