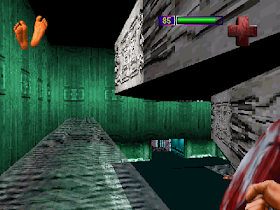 Genre: Action, FPS
Perspective: 1st-person
Gameplay: Shooter
Settings: Sci-Fi / Futuristic
Published by: Accolade
Developed by: Any Channel
Released: 1996
Platforms: PlayStation (PSX, PS1), 3DO Interactive Multiplayer
Before you the next game in the genre of the corridor action, in the style of Doom (in the sense of the first person), the truth, performed at a very good level (for 1996). What is the difference between Doom and the game presented here? PO'ed - the game is made with a great deal of healthy humor, which does not leave the developers until the end of the game. You control the Ox, which serves as a cocoon on a space truck. When your ship was attacked, and the whole team was taken prisoner, you decided not to lose heart, but to release your comrades (well, as if in the film "Under Siege" with Stephen Segal). Until the milk ran out, you set to work. But do not think that you left the kitchen rattling with rockets and machine guns. Instead, you go to battle with a frying pan in your hands, but you will have another, no less terrible weapon. Somewhere you will find a drill, somewhere "Meat Seeker", it shoots terrible pelmeni shells, as well as other, not quite kitchen tools, such as a rocket with a camera on board. It's good that in this game you do not need to kill people, because your enemies will be alien creatures such as chicken hams, Amazons, Buttheads, cyclops and various mechanical creatures, etc. All of them are very colorful, but not so terrible. True, they are extremely aggressive. All these things are looking for you in the hope of killing.