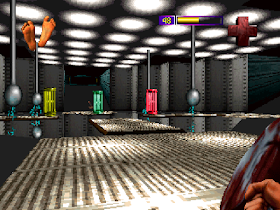 Genre: Action, FPS
Perspective: 1st-person
Gameplay: Shooter
Setting: Sci-Fi / Futuristic
Published by: Any Channel
Developed by: Any Channel
Released: 1995
Platforms: 3DO Interactive Multiplayer, PlayStation (PSX, PS1)
PO'ed - not a simple shooter, not an ordinary action and the very name of the game is very unusual. I recently read that the original PO'ed was called PissED Off (in principle, so it is deciphered), and then decided to "simplify" and simplified, and not only the name. According to some suspicions, even the name of the protagonist does not shine with the number of letters. But the rest of the developers have come off to the full. Space expanses, flying monsters, drill and frying pan, live slime and dead Elvis. Do you think this is a side-altar? No. Fantasy Any Channel has no limits, and unlike CyberdiL1o developers, the chaos has turned out to be qualitative and incredibly exciting.
If I was asked which first FPS I got into my soul, then DOOM in the list would be the second, and even the third, and only in the first place was PO'ed and it's not only about games on 3DO Interactive Multiplayer, and certainly not at all from the wonders of graphics, but from an incredible drive, but everything in order. Graphics are naturally there, and even now, of course, there is. It is bright, juicy, but certainly not ideal. You can not compare, for example, with Killing Time or with Iron Angel of the Apocalypse: The Return - it's just different. Music? Music is also there, but its role is not very distinct, and not to say that it was so much. And where is the drive? Drive in flight, but the cook can not fly.
And you play just for a fat cook. The plot for similar games at that time did not matter, so here you can equally successfully think that the aliens have abducted you or captured the ship on which you served as a cocoon. You can choose any story start, because I'm sure 100% that you will not read briefings between missions, but the goal is already clear and painfully familiar. The goal is to kill everyone. However, it is not so cruel, and in general there is no cruelty in its pure form. Enemies either a simple leg, or red freaks, painfully resembling monsters from The Horde, or huge monsters like golems, or small slugs able to share. Anyone, just not people. Although they are nonhumans or devices, they have intellect. There is a manner of behavior and in general they are all different, with all of them interesting.
Yes, but despite the fact that you are a cook, like the botanist from Half-Life, the cook of you has come out one more. Armed with a frying pan first, you are leveling against the above named creatures, gain a lot of interesting weapons. Knives, drills, flamethrowers, cannons firing shells and an incredible weapon - a rocket launcher. Shot from it, you start to see the world from the camera mounted on the rocket and, most importantly, you can control it! Manage before the collision and of course it is in your best interest that it happens at the right time. Imagine - at a tremendous speed, from the first person, you rush through the 3D world, flying obstacles, doing some, I do not know, pirouettes and hoping to find the place where the maximum number of enemies accumulated, and only then the explosion of enormous power.
Of course, the rocket, it's not flying yet. The main character has slippers, but they can not fly in them, they can only run faster. But it is possible to find a jet pack! And with him in the huge hangars of space stations and in narrow labyrinths you can soar up, fly, fight, maneuver. Absolute freedom. Especially if you play at an easy level, then you do not need to think about fuel for a knapsack and other nonsense. It will only be necessary to concentrate on the level, because not all of them are from the category of "kill all". At some levels it is enough to find a way out, on others to solve some simple task, in others ... Yes! Shredded, critters in cabbage. Helping you in this matter will be a sense of elbow, not always a useful 3D map and your own head (with it you will search for secret levels). In short, have fun, because with PO'ed it works without problems.

With a frying pan in your hand, hit the enemy until it collapses (use against the frenzied legs). The ax (you have an unlimited number of them) can be hurled at someone you do not like.
When the level of your life energy is completely low, choose a pot or knife now you can destroy the enemy in one blow.
The electric gun shoots with a charge of current, turning the enemy into fire. The machine gun is good against the iron big men. Drill drill through everything, for example, for example, large pieces of dough. The machine shoots two barrels with tracer bullets. The flamethrower burns everything in its path.
A grenade launcher with a guided warhead is the most effective weapon. After firing from it, you can control the projectile until it reaches the target.
A neutron gun with a parabolic mirror scatters chaotically with flying charges. Shoot it around the corner.
The only way to consider yourself is to fire a missile and, when the rocket flies a few hundred feet, sharply rotate it to yourself (⇦, ⇨).

While playing press C + X to enter 3D map mode; rotate the map and then press P, then LS + A + B + C as the map returns to normal.

When you use the Frying pan as your current weapon, press c twice to display the weapon select option. Highlight the drill, and press A + RS. If you put it in correctly will the words ''kneel before me!'' appear. 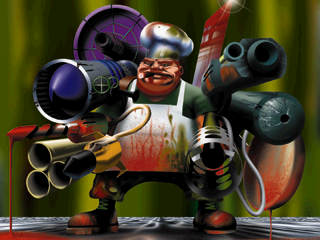