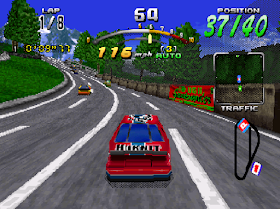 Daytona USA: Championship Circuit Edition for Sega Saturn was released in Europe and North America in 1996. In North America, the version of the game supporting the Sega NetLink modem called Daytona USA: CCE Netlink Edition was also sold. It was available only through the online store Sega.
The Japanese version of the game for Sega Saturn was released under the name Daytona USA: Circuit Edition. It includes tracks from Daytona USA, the time of day changes on the tracks and the mechanics of drift is improved.
In 1997, a version for the PC was published. In Japan and South Korea it was released under the name Daytona USA Evolution, and in the rest of the world as Daytona USA Deluxe. This version has a new level called "Silver Ocean Causeway", multiplayer was added to the network up to 8 players, and the graphics and distance of the camera from the car were improved. The game is launched via Direct3D.
‹
›
Home
View web version