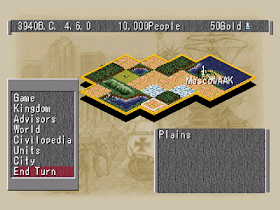 Genre: Strategy / Tactics
Perspective: Bird's-eye view
Gameplay: 4X, Managerial / Business Simulation
Visual: Free-roaming camera, Isometric
Passing: Turn-based
Interface: Multiple Units / Characters Control, Point and Select
Published by: Activision
Developed by: MicroProse Software
Released: 1999
Platforms: PlayStation (PSX, PS1), Windows 3.1
The player commands a strong army armed with the latest advances in progress, and this is enough to grab land and conquer peoples. Perhaps you will even be able to conquer the world and establish colonies on other geysers. If you are not interested, you can start creating political models and lead your empire to prosperity and prosperity. May all 28 Wonders of the World, collected from you, be proof of your greatness. Yes, you do not need to fight at all! Demonstrate diplomatic wisdom and help the irresponsible (but strong) opponents on the basis of Peace and Accord to create a Union. but, sorry, the Alliance of Independent States. Perhaps you will avoid major conflicts like World War II. At least try, the scenario of the development of diplomatic relations between the largest states of that period in the game is, like much more.
This game is more complex and exciting than its original version. You can create and manage empires, all tasks to solve economic, political and social problems will fall on your shoulders. Also in the game there is something to see, for example, the Statue of Liberty or the workshop of the great Leonardo da Vinci. "We took one of the best-selling games among the strategies for the PC and remade it for PlayStation," says the project manager, and we hope that in this market it will win no less popularity. "
Before inserting the disc, we decided to use Beginners Mode (mode for beginners). It seemed to us that it would be easier to install the game and understand its features. But after a while it became clear that it was much easier to act in the usual way, not paying attention to the clues. Of course, some mistakes will still be made by you, but in the game you will understand much better!
The goal of the game is world domination! It is assumed that you are playing and fighting in the role of a famous political leader. You can choose anyone, we have chosen the good old uncle Lincoln, how perfectly capable of starting conquests ... oh, sorry, the colonization of new lands. You will have to build cities, create institutions of power, teach the people to read, count and think, and then collect troops and go to the territory of enemy states, so there it is worthy of using the acquired knowledge. During the game you will have to maintain peace between tax collectors and citizens who do not want to pay these taxes. But you have the right advisers to help you solve your difficulties. They constantly "keep your hand on the pulse" of your state and will not let it die, however, sometimes they use your trustfulness for their own mercenary purposes, so think at least a little on your own. And, in the end, are you a ruler or who? You start the game with a small piece of land on the unexplored world wide spaces. Choose the enemy and the nationality of your people. In fact, you have lots of options, choose carefully!
The graphics in the game are very simple, and you will have to use your imagination in full growth to imagine soldiers in detail, etc. Sound effects are also minimal, but in general this is enough. Having played in democracy, we decided to try the methods of the most unpopular dictators in world history. As it turned out, they work excellently and, most importantly, help to get out of any situation. In this game there is everything that can characterize it, as an amazing game of this genre and, most importantly, the best such game for the PlayStation. After it, you can really relax, relax and have fun.
‹
›
Home
View web version