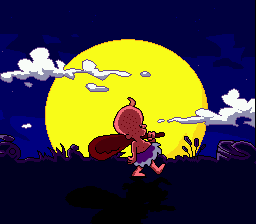 Genre: Action
Perspective: Side view
Gameplay: Platform
Visual: 2D scrolling
Published by: Virgin Games
Developed by: Core Design
Released: 1993
Platforms: SEGA CD / Mega-CD, SEGA Genesis / Mega Drive, SEGA Master System (MS)
The actions of the game Chuck Rock II: Son of Chuck occur some time after the events taking place in the first part of the game Chuck Rock. After Chuk saved his wife, Ophelia from Gary Gritter, some time passed. Chuck found himself in making cars out of stone. And he opened a small factory for the production of cars. After some time they had a little son named Chuck Junior. The competitor seeing that Chuck gets cars better than him, hires people who kidnap him. As Ophelia begins to hysterical, the little son of Chuck Junior ​​does not have anything else to do but wipe the snot, pull up the diaper, take the club and go to his father's rescue. Gameplay game is similar to the first part, you have to go through the prehistoric world using one club. Sometimes you will be helped by friendly beings. In the game there is a humorous animated cutscenes narrating the story of the game. And the game itself is filled with a lot of humor.
‹
›
Home
View web version