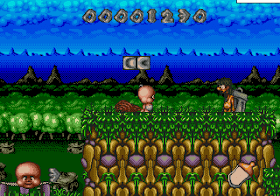 Genre: Action
Perspective: Side view
Gameplay: Platform
Visual: 2D scrolling
Published by: Virgin Games
Developed by: Core Design
Released: 1993
Platforms: SEGA Genesis / Mega Drive, SEGA CD / Mega-CD, SEGA Master System
The game takes place some time after the first part, and the way Chuck Rock saved Ophelia Rock from T-Rex clutches called Gary Gritter. In general, after a while they had a child, I think the details can be omitted. They have a son, and they call him Chuck Junior. Chuck senior works at a car factory where he develops good skills in his work. Competitors kidnap him. And his son Chuck Junior, hastily pulling up the diaper and wiping the snot, climbed out from under the table, took a truncheon and went to help his father out of this situation. The game is full of humor and funny situations. In some of the levels, friendly animals help him.
The game is also known under such names: Chuck Rock 2: Son Of Chuck Rock, Chuck Rock II.