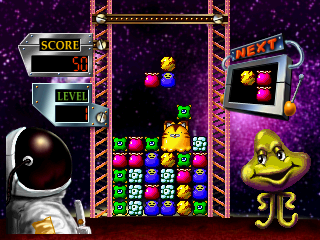 Genre: Puzzle
Gameplay: Falling Block Puzzle
Pacing: Real-Time
Setting: Sci-Fi / Futuristic
Published by: Panasonic Software Company
Developed by: Warp Inc.
Released: 1995
Platform: 3DO Interactive Multiplayer
Classic Russian "Tetris" is supplemented by a legend about the arriving from another galaxy of disgusting and very dangerous Deon'Nz.
In Trip'D, you can play together, and your destroyed ranks inevitably appear on the opponent's screen.

Whenever four blocks of the same color appear on one square, they turn into Deon'Nz. Monsters are different depending on the color of the blocks. They die when you seek to destroy the lines of the same color. At the same time because of the green Citr'n wrongly selected layers fall on you, because of the gray Hawk'n disappear twelve additional blocks, etc.
Four monsters, grouped, generate a mega-chord of an arbitrary color, the consequences of destruction of which are four times more dangerous than the intrigues of ordinary monsters.

A larger creation can be obtained by arranging four small ones.
If, for example, two white and one blue creation are built into a line, and then the red creation is arranged on this line, a large creature will be obtained.
‹
›
Home
View web version