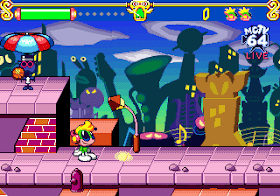 Genre: Action
Perspective: Side view
Visual: 2D scrolling
Gameplay: Platform
Setting: Fantasy
Interface: Direct Control
Published by: SEGA of America
Developed by: Red Company Corporation, SEGA Enterprises Ltd.
Released: 1995
Platforms: SEGA 32X, SEGA Game Gear
Unusual colorful platformer for the game console Sega 32X. About the Tempot grasshopper, who has hyper sound energy. His mission is to save the world of music, the Planet Rhythmia planet from King Dirge. He is trying to steal the rhythm of the planet. You have to fight against different creatures, you can jump on them from above, beat them with your foot or throw notes (rhythms) in them. And as our hero is able to fly for a short time, which gives the game a special zest and piquancy. The game sounds great music, a mixture of different genres of rock, rap, funk, it varies depending on the state of health of the character. The game is very beautiful and executed in a cartoon style. In Europe, this game never came out. To someone, the game can resemble the game Rayman from Ubisoft. The game will be continued in the pocket gaming console Sega Game Gear and went under the name Tempo Jr., as well as on the Sega Saturn, called Super Tempo.