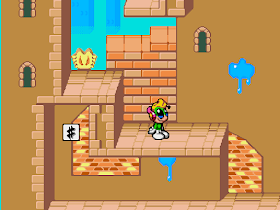 Genre: Action
Perspective: Side view
Visual: 2D scrolling
Gameplay: Platform
Setting: Fantasy
Interface: Direct Control
Published by: SEGA of America
Developed by: SIMS Co.
Released: 1995
Platforms: SEGA Game Gear, SEGA 32X
You play as Tempo, a grasshopper who uses his special "sound energy" to save the Planet Rhythm from the evil creatures of King Dirge.Music in the game is a mixture of rock, rap and funk and varies depending on the state of health and the forces of Tempo.The first game from the Tempo series appeared on the Sega 32X. Then came out the version for Game Gear - Tempo Jr., and finally, for Sega Saturn appeared the game Super Tempo.
‹
›
Home
View web version