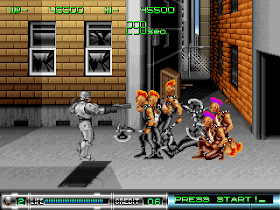 Genre: Action
Perspective: 1st-person, Side view
Visual: 2D scrolling
Gameplay: Shooter
Setting: Sci-Fi / Futuristic
Narrative: Crime
Published by: Data East Corporation
Developed by: Data East Corporation
Released: 1991
Platforms: Arcade Machine, Nintendo (NES), Amstrad CPC
RoboCop 2 is a 2D side-scrolling shooter with 2.5D gameplay that puts players in the shoes of RoboCop. The game is based on the movie of the same name and loosely follows its plot.
You fight a variety of enemies including street scum, walking corpses, mechs, robots and bosses. Most gameplay includes side-scrolling shooting and evading enemies but enemies can be seized, punched and thrown down. Sometimes enemies appear in the background of the screen and can only be killed while aiming at the screen. Along the way more weapons like a Cobra gun, Bazooka and Gatling can be picked up. These have limited ammo. The player also has the ability to jump and sometimes extra live capsules can be picked up. In bonus stages RoboCop has to shoot helicopters and trucks while driving a police car or motorcycle. This is done by moving the crosshair over the screen while driving towards the screen.
‹
›
Home
View web version