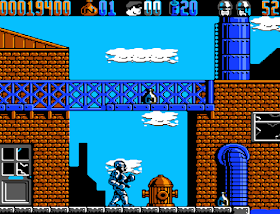 Genre: Action
Perspective: Side view
Visual: 2D scrolling
Gameplay: Platform
Setting: Sci-Fi / Futuristic
Narrative: Crime
Published by: Data East USA
Developed by: Painting by Numbers
Released: 1991
Platforms: Nintendo (NES), Arcade Machine, Amstrad CPC
The action takes place according to the scenario of the second part of the movie about a robot policeman. The graphics in the game are beautiful, the stages are colorful, and the soundtrack at altitude. Levels are built quite meandering. On each of them are scattered drugs that need to be destroyed, and, in addition to the enemies of people, there are various robots, bombs, as well as hostages that you save. If at the level it was not possible to destroy more than 55% of the drug "newk", then Robocop goes to shooting range and shoots at targets. Often to collect all drugs you need to find a secret at the level. At a long distance, Robocope fires at the enemy, and on the close - beats his fist. Enemies are cruel, so it's hard to play. Moreover, the control is a little inert. Murphy overreacts at corners, so be careful. A valuable gift for fans of retro games.

You must arrest a certain number of drug dealers, the rest can simply be destroyed. The drug addict to be arrested is recognized by the flickering of his face on the scoreboard.
If RoboCop-2 control to pass the stage, but he could not score the required number of points, collecting a new one and detaining criminals, the management of the OCP concern gives him the chance to catch up, practicing shooting live targets.
When you see the person (in the short term) who appears in the window, you should:
- determine whether the offender is or not;
- if the offender - to catch his face in the crosshairs of the sight;
- shoot it (by pressing button A).
Your task - successful shooting to reduce to zero penalty points, highlighted on the left on the scoreboard.
Please note that in case of unsuccessful shooting, the OCP management takes the cyborg for calibration.
Replenishment of the stock of cartridges and the time reserve is achieved by falling into the falling clips and clocks.
The protracted struggle with the OCP taught the leaders of the drug mafia to the methods of conspiracy in the production and storage of Newuke. For example, there is nothing to indicate the presence of a secret dungeon on one of the islands, so often, when you are in suspicious places, click ↓. So you can get into one of the huge Newk warehouses. This method should be used at all stages.
The power of Robocop is enhanced by the jugs found on the way, replenishing vital resources, ammunition (W), protective equipment (I), which make it temporarily impenetrable.
The robocop gets the right to put its name in the table of higher (HI) results. To do this, the marker (arrow) moves the joystick along the alphabet line. Pressing the A button selects the next letter of the entered name (B - cancellation). Then the joystick is pressed ↓.
‹
›
Home
View web version