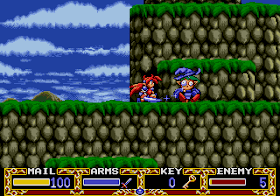 Genre: Action
Perspective: Side view
Visual: 2D scrolling
Gameplay: Platform
Art: Anime / Manga
Published by: Working Designs
Developed by: Nihon Falcom Corp., SEGA Enterprises Ltd.
Released: 1995
Platform: SEGA CD / Mega-CD
One of the four best-selling RPGs on the Sega CD. Let not a pure role-playing machine, but 100% worth it!
The action takes place in a fantasy world. Let's get acquainted with Mail, a pretty girl and at the same time a hunter for treasures. But she is always not lucky - as soon as it comes to reward, everything goes awry and she remains without money. Here, as an ad was specially hanged: "Whoever catches an evil wizard that terrorizes the local population will receive a big reward" (as much as 2 million coins). But as it turns out, these are only flowers. Searches have begun!
The game is very similar to Wonder Boy in Monster World. Between the levels, in the villages (or else where) you can visit the shops and buy weapons, armor, various items. Later, other characters will join Mail, which can be chosen instead of the girl. Each of them has its own characteristics, various attacks and armor.
The original game first came out on the Japanese computer NEC PC-8801 in 1991, then ported to PC-9801 (1992). Then already on PC Engine CD and Sega CD. Next came the version for SNES.
Each of the reincarnations is different in its own way. For example, in the Sega CD version you are already operating a real sword with the joystick button, and not pressing on the enemy as in the case of a PCE-CD. On Super Nintendo improved graphics, but only Sega CD version was translated into English. Also, games differ in levels and monsters.
It is a pity that in the future Popful Mail has not received sequels.
In another way, this game was called Popful Mail - Magical Fantasy Adventure
‹
›
Home
View web version