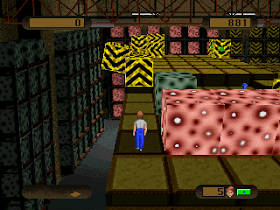 Genre: Puzzle
Perspective: 3rd-person, Top-down
Published by: 3DO Company
Developed by: Tetragon
Released: 1994
Platform: 3DO Interactive Multiplayer
A funny logical 3D game Gridders for the game console Panasonic 3DO. Associated with cubes. What is particularly valuable in this game is a rather large story, revealing the storyline with each level passed. The game takes place in the future in 2049. As always, the Earth is threatened by an ecological catastrophe, connected with the pollution of the planet by various means. It was decided to enlist the support of the unclean Gridders Corporation. In production, Geo-Radical Interactive Dynamo machines are used. This is a special secret technology, fiercely guarded by the general director of the corporation Lazarus R. Trench. Under the assumptions of this corporation, it was possible to uncover the secret of cold nuclear fusion. What gives it unlimited cheap energy. Corporate profits are calculated by numbers beyond reality. But for the good of the world, this secret is not in a hurry to disclose.
Few people know that at the plant of this corporation work only robots, everything is automated by 100%. Previously, people worked on it, but recently one of them was replaced by one 20-year-old commissioner named Zak, who was also fired at the beginning of our game. What informed him of a check about the payment of his labor, but also a note was attached to the check, on which it was written - in the depths of the factory there was a terrible secret and the signature "Sandra". So you have to get to this secret through 36 levels, and just find out who Sandra is.
Something similar to the game Intelligent Qube for PlayStation.