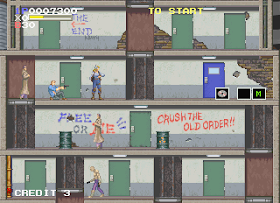 Genre: Action
Perspective: 3rd-person
Gameplay: Arcade, Platform
Published by: Ving Co
Developed by: Taito Corporation
Released: 1997
Platforms: SEGA Saturn, Game Boy Advance (GBA), Arcade Machine
The game is a sequel to the Elevator Action 1983 release. The most warmly perceived version of Elevator Action Returns is the port on Sega Saturn, released in 1997. Another 10 years later, it was reissued as part of the collection of Taito Legends 2 for PC, PlayStation 2 and Xbox.
Two players can play simultaneously, choosing from three characters: one of them is stronger in hand-to-hand fighting, someone shoots better, and someone runs faster. Unlike the relatively quiet "espionage" first part, in this game a hot conflict of the squad of special forces and a terrorist group is unfolding. You will wade through intricate buildings and you will be riding a lot on elevators - in cabins or on roofs; Be careful, as they can easily crush you. Along the way, you must search the rooms behind the red doors to find the bombs; The game will not let you go until you enter them. Behind the blue doors you can find the power-up, and from the enemies drops out different weapons.
In total we have six levels here and two endings: conditionally good and bad. In good your heroes manage to disrupt the launch of a nuclear missile, forcing it to crash into a closed hatch and explode in the mine. No final video will follow, but than it ends for them, it is understandable and so. In a bad ending, you do not have time to complete the mission in the allotted time and the missile hits its target.
‹
›
Home
View web version