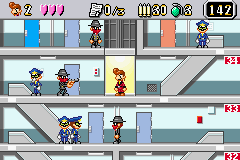 Genre: Action
Gameplay: Arcade, Platform
Narrative: Spy / Espionage
Published by: MediaKite Distribution Inc.
Developed by: Taito Corporation
Released: 2002
Platforms: Game Boy Advance (GBA), SEGA Saturn, Arcade Machine
Time is an ephemeral substance. You do not have time to look back, and days, months, years pass by. But the past does not evaporate so easily - it's human to remember. Epochs are given names, symbols. For example, what times are associated with the words "secret agent", "secret documents", "conspiracy", "cold war"? Right, sixties. Good, apparently, there was time.
For their history, computer and video games have never been afraid to use the atmosphere of the sixties. Far behind the examples do not have to go - No One Lives Forever. But if you go deep into times, you can find real pearls. For example, Elevator Action from Taito. "Bondjamesbond" will live.
What was Elevator Action like? A powerful collection of stamps from "spy" films. A huge skyscraper, filled with security and bandits. Inside the building are important documents. The task of the spy hero is simple -
to get on the roof and, having collected the necessary papers, to get out from there on the sports car. At the head of the game process is the movement of our hero through the building with the help of a complex system of elevators, which in Elevator Action are considered the second (after the correct "Walter") for the usefulness of weapons. You see, they can be GIVEN. Someone climbed on the roof of the cabin? We press the button of the last floor. Someone walks the mine? Gently press down on top.
After such a simple process, we spent hours. Elevator Action has gained its popularity.
And now, like a bolt from the blue, in 2002 a remake falls on us. Now the classic (insultingly called "old") and updated versions were combined in one compilation for Gameboy Advance. Only for Japan.
So, what does the updated version of Elevator Action give us? First, the schedule. Bright, funny characters and their opponents, clear backgrounds. Eyes do not hurt. Nothing special, but it's nice to play. The gameplay is still the same Elevator Action, only with elements from Elevator Action Returns (Elevator Action 2). The choice is given to three characters, each has its own parameters in speed, shooting, etc. (Of course, it is worth choosing an ultra-speed girl - the sprawls do not live long here). Levels are now not only vertical - sometimes you have to go about with legs in the horizontal direction. But the main thing is new bonuses. Entering a special room, the agent puts on an enemy uniform, like the Bald of Hitman. If you prefer more radical methods, then the "automatic" bonus is specially created for you. And let the enemies fall in bundles at your feet!
The developers did not think about the music for a long time. As a result, variations on the melody theme of the original Elevator Action play on the levels. Turn it off. Put the Deep Purple. Their "Highway Star" and "Burn" are perfect for the game.
Elevator Action entered the new century with a modern appearance and an updated concept. Behind her - twenty years of experience. And so far the special agent from his elevator does not intend to go out.
‹
›
Home
View web version