Ecco: The Tides of Time (SEGA-CD) 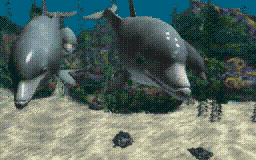 Genre: Action
Perspective: Side view
Visual: 2D scrolling
Gameplay: Puzzle-solving
Published by: SEGA of America
Developed by: Novotrade Software Kft
Released: 1994
Platforms: SEGA CD / Mega-CD, SEGA Genesis / Mega Drive
A series of games about the talented dolphin and its underwater habitat, which he seeks to protect from all sorts of threats. Being a remake of the old classic game concept, the game has exciting graphics and animation.
Now, if there were not such distractingly difficult puzzles, Tides of Time could become a classic for ages. The game should be seen as an attempt to create an ideal platform formula that spawned two sequels that are as beautiful and difficult as the original.
A little time has passed since Ecco defeated Vortex in the first part. But according to rumors from distant lands, new problems will soon begin. The surviving servants of Vortex are managed by Queen Vortex herself. And soon the whole army is ready to attack the colony Ecco. Help Ecco to free his house from the evil Queen! The game adds the ability of Ecko to "transform" into other sea creatures.
The game also came out on Game Gear, Mega Drive, Master System, Wii (Virtual Console).
Still, the series about the eclectic dolphin is wonderful, however "The Tides of Time" is at least twice as simple as the original part, so I would argue about the frustratingly difficult puzzles. The beginning at it confusing, however the further passage, in particular, battle with the Queen, considerably concedes in complexity "Ecco, the Dolphin" and struggle with Vorteksom, in particular. The only difficult gap "The Tides of Time" I think is the bay of jellyfish, where Ekko is going to be a real complicated race on the air currents in the sky with jumps across the abysses. There for a long time you need to hone your skills, constantly breaking down and starting the race anew to go through obstacles and jellyfish. In the rest it is beautiful and much more simple. PS. I did not know that it was a platformer. I find the genre "Ecco the Dolphin" difficult, but I can not take it to this category.
‹
›
Home
View web version