Ecco: The Tides of Time (SEGA) 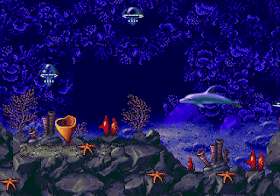 Genre: Action
Perspective: Side view
Visual: 2D scrolling
Gameplay: Puzzle elements
Published by: SEGA of America
Developed by: Novotrade Software Kft.
Released: 1994
Platforms: SEGA Genesis / Mega Drive, SEGA CD / Mega-CD
The control system and a high level of complexity have not changed since the first game of the series. It added a new type of job, for example, following after another dolphin and pseudo-3D levels. One of the innovations began Metasphere, which can be converted into other beings Ecco. Transformations depend on the level on which the metasphere and allow to turn into a seagull, jellyfish, sharks, a school of fish and the drone of the Vortex. The scale of health, air, the glyphs have not changed, there were upgrades sonar, "the song of attack" and "Song of confusion", which became available at the beginning of the game.

The story continues from the point where the game ended in Ecco the Dolphin. It turns out that the queen Vortex is not defeated, it followed the Ecco on Earth to found a new nest.
Ecco suddenly loses power given to him by Asterite. He meets the female dolphin with an unusually long fins, called Trell, who is his descendant. She arrived with the aim to take away Ecco at one time - distant future. Future Trell - a paradise for dolphins. Dolphins appeared gel pouches that give them the ability to fly, and telekinetic abilities. The ocean began to have their own minds, and flows formed in the sky, tied all reservoirs in the world.
In the future, Ecco meets Asterite. Asterite said Ecco, something went wrong. When Ecco used the time machine to save his flock, then for a time shared in two. One embodiment of the future has become a reality of this paradise. The second - a dead mechanical world, devastated Vortex. In this reality Asterite killed the queen (as it communicates with Ecco in this world, explained later). After this conversation Asterite Ecco sends back to his time.
Upon returning Ecco have to collect Asterite again, collecting the scope of which he is a member. The last two areas have been stolen Vortex drones and shipped in the future. In order to defeat the Queen once and for all, Ecco is necessary to return them. Use Time Machine Atlantis is not possible, since it can only send to the past. The problem is solved when Ecco Vortex drones catch and take it into their future. In this future, a lot of cars similar to those that were in the last levels of the first game. One of these levels is Gravitorbox, in which gravity is manipulated in unusual ways. As a result, Ecco is the last two areas, and after the boss guarding them defeated, the portal opens at Ecco.
Asterite again assembled, and again he gives Ecco force similar to the force in the first game. It also calls on all compatriots Ecco take part in the fight against the Vortex. Ecco himself assumes the queen. But she runs away again, turning into a larva and goes to Atlantis to use the time machine of Atlantis. Ecco sends the following to destroy the machine. Once in the past, the queen finds creatures that can not win, because residents Vortex as a form integrated into the Earth's ecosystem. Ecco, instead of destroying the car dives into it after the queen and disappears into the abyss of the flow of time. The storyline was planned third game, but it did not come out.