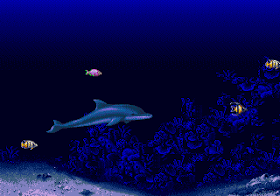 Genre: Action
Perspective: Side view
Visual: 2D scrolling
Gameplay: Puzzle-solving
Published by: SEGA of America
Developed by: Novotrade International
Released: 1993
Platforms: SEGA CD / Mega-CD, SEGA Genesis / Mega Drive
The game Ecco the Dolphin for Sega Mega CD is slightly different from the version of the game ECCO The Dolphin for Sega Mega Drive / Genesis. The game has new and revised rounds, as well as the musical accompaniment was redesigned. The plot of the game tells us about the life of the dolphin Ecco, and at the moment when it was on the surface, a storm began, and his pack disappeared somewhere, later from the Big Blue whale, he learns that such a storm happens every 500 years. He has to solve a lot of puzzles and puzzles during the large number of beautiful levels with underwater landscapes and everything in order to find his flock.
‹
›
Home
View web version