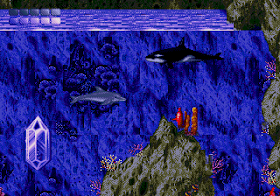 Genre: Action
Perspective: Side view
Visual: 2D scrolling
Gameplay: Puzzle elements
Published by: SEGA of America
Developed by: Novotrade Software Kft.
Released: 1992
Platforms: SEGA Genesis / Mega Drive, SEGA CD / Mega-CD
Life was one big adventure for Ecco, a young dolphin. The ocean seemed endless. At great speed, breaking the waves, Ecco jumped into the air - almost flied! Then, taking a deep breath, he plunged into the blue depths, where corals and shells covered the seabed.
Of course, Ecco knew that dolphins can not breathe underwater. Fish and corals remained under the surface of the sea, but the dolphins needed air. This was a real mystery, and Ecco wanted to know the answer to it.
The ocean is full of songs. Among them were simple, Ecko knew them from birth. They served to appeal to dolphins and other singers of the underwater world. There were also new songs, the study of which took time. They could open the shells and frighten away the enemies scurrying around the bay of the dolphins. In the end, there were songs just about how good it is to live and be free! Songs of dolphins were also told about stinging jellyfish, about strong currents and stone walls that are locked singing deep under the water. But best of all was a proud, powerful song about the schools of fish filling the ocean, and underwater caves filled with air where dolphins could breathe.
Five bright marks shine on Ecco's head. No one else has such silver spots. When the air darkens, dolphins sing that the marks of Ecco
same as five flickering dots high in the sky. The song tells that Ecco is special, the ocean's chosen. Or maybe the tags are just for beauty, like strips in some fish.
The sea abounds not only with fish and corals, but also with dangers. Many things can hurt Ecco, then he loses power. When his health is over, you will have to start from the beginning of the level or from the last passed barrier crystal. To prevent this, keep your health at the maximum. Attack the schools of small fish for food and recovery.
Find healing shells, contact them using sonar. Then the shell will release a bubble of air, which will give Ecco forces.
When swimming in the sea, do not forget that Ecko is not a fish, and sometimes he needs to breathe. Dolphins can dive into the deepest corners of the ocean, but they always need to be close to the air. Otherwise, when the air runs out, you again have to continue from the beginning of the level or the barrier crystal.

You can breathe in two ways:

But Ecko is not at all helpless. He can attack his enemies. When you press the attack button, Ecco jumps forward at a high speed, but for a short distance. So he can hit the enemy or break an obstacle.
When you press the sonar key, Ecko sings in the direction of his gaze. The song echo will bring information about the dolphin environment (see echolocation).
In the future, Ecco will gain the ability to attack enemies at a distance. To do this, you must first press the attack key, and then quickly - the sonar key.
Use Dolphin songs to survive during a long journey. With the help of a sonar, sing to those living in the sea, to the rest of the singing and shells, to the crystals, and in general to everything incomprehensible. Learn to listen to your songs, because they carry different information.

With the help of songs you can:

The song that returns back brings information about what lies ahead. This is called echolocation. When the sonar key is held down, the song passes through the currents and caves and reflects to Ecco, carrying a map of his surroundings.

Barriers, moving stones and seashells (orange squares). Get used to using echolocation. Sound the level in all directions to get the most complete picture of it. If you can not find what you really need (air or path to salvation) In one direction, try another - the sought-after can be very close. Find healing shells, contact them using sonar. Then the shell will release a bubble of air, which will give Ecco forces.

In order for Ecco to become invulnerable, press and hold A + start at the same time as the level name appears. When the level starts, release the buttons and press start.
To disable music, type in pause mode: A + A + A + A + A.
To access the secret menu in which you can select the desired level, set the tempo of music, endless lives, etc., do the following manipulations ... Using the left or right button, rotate the hero so that he looks at the screen. Now click on the pause and type the code: right + B + C + B + C + down + C + up.
In order for the sonar dolphin to be able to destroy enemies in its path, enter one of the passwords of the stages with infinite oxygen (see item 9). Now, during the game, using the combination of A + B, you can deal with enemies.
In order to start the game with endless lives, enter NIHPLODS as the password.
In order to start the game with infinite oxygen, enter LIFEFISH as the code.
Levels with unlimited oxygen reserves: The Undercaves: LEVELSCT, The Lagoon: SHARKFIN, Open Ocean: KHDBVRIS, Ice Zone: XRGQXRIX, Hard Water: MAGLXRLM, Cold Water: LNXHXRLB, Island Zone: DVJLURIC, Deep Water: OEWSURLC, City of Forever 2: FIVEPODS, The Machine: ECCOFMLY.
‹
›
Home
View web version