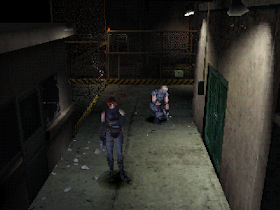 Genre: Action, Strategy / Tactics
Perspective: 3rd-person
Visual: Cinematic camera
Gameplay: Survival Horror
Published by: Capcom Entertainment
Developed by: Capcom Co.
Released: 1999
Platform: PlayStation (PSX, PS1)
The plot of the game Dino Crisis was too smart and, in my opinion, very meager. There are many subject branchings in it. In short, a group of special forces were landed on the island of Aibis, that they would find Professor Kirk there. It needs to be delivered to the mainland. But from the very beginning the operation was not asked. After all, because of the experiments of Dr. Kirk with the third energy the portal was opened, and dinosaurs came from it nowadays. Now the task of the special forces is to return alive.
As for the gameplay of the game, it is very similar to the gameplay of Resident Evil. Here you also have to solve many riddles, collect various items. The only difference is that there are not zombies, but dinosaurs.
‹
›
Home
View web version