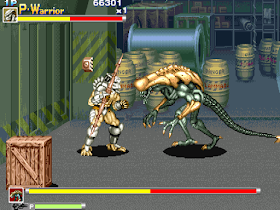 Genre: Action
Perspective: 3rd-person, Side view
Gameplay: Beat 'em up / Brawler
Setting: Sci-Fi / Futuristic
Published by: Capcom Co.
Developed by: Capcom Co.
Released: 1994
Platforms: Arcade Machine, Super Nintendo (SNES), Atari Jaguar
The game, judging from the title, will be about the battle of the Alien against the Predator. It belongs to the genre beat'em up, where you are given 4 completely different characters: Predator warrior, Predator hunter, Lieutenant Linn Kurosawa, Major D. Schaefer, each of which has a set of certain qualities: speed, strength, skill. Management in the game is not particularly difficult, you can easily apply in practice the entire arsenal of techniques for each character. In order to diversify the game process, developers scattered various firearms at levels, then you and the grenade launcher, and machine gun, and other krutoten, if suddenly find something powerful, you know, in the vicinity of a lot of those on whom it can be applied. Enemies in the game, more than enough, Alien kittens swarm on all sorts of locations, the battles with which are very exciting and the game is taken literally in one breath.
‹
›
Home
View web version