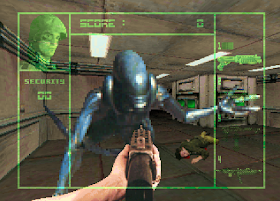 Genre: Action, FPS
Perspective: 1st-person
Setting: Sci-Fi / Futuristic
Published by: Atari Corporation
Developed by: Rebellion Developments
Released: 1994
Platforms: Atari Jaguar, Arcade Machine, Super Nintendo (SNES)
Game Alien vs. Predator is a bestseller for Atari Jaguar, it's a classic 3D shooter. The game uses a lot of original solutions, which were used in games after many years. The game was exclusive only for Atari Jaguar, and it is no longer on any systems. For the game you can choose one of the three characters of the Alien, Predator or Private Colonial Marine Corps Lance Lewis. However, the game for each of them is not similar to the previous one. Thus, we can say that in the game Alien vs Predator collected three different games. Each of the characters is different by its own capabilities and the specifics of the game, as well as a separate storyline.

Playing for the Alien, your task will be to save your queen, who was abducted and kept on the ship by predators. You have to destroy a lot of predators and marines. The stranger can not heal himself, he can only create new Aliens, placing soldiers in cocoons. And now when the Alien's death the game does not end, and you start playing a new stranger from the cocoon. Moving between the floors will have to be through ventilation.

Playing for the Predator, you will have the opposite task to destroy the Queen of Aliens, that would take possession of her skull. You can move around the floors with an elevator, carry a first aid kit to replenish your health, or use a special device - it becomes invisible. At the same time the way your opponents are destroyed depends on your weapons and the number of points. If you destroy the enemy in a state of invisibility, your honor points will decrease. And this, in turn, can deprive you of some kind of weapon. If you destroy the enemy in the visible state, honor points increase and the arsenal expands.

Playing the Marine, we are waiting for the simplest task - you need to escape from the military base, captured by Aliens and Predators. Start to be unarmed at the guardhouse, without traffic sensors and access cards. All this is to be found on the level. You can use the found medicine kits, but do not take them with you. From the weapon is not available such a large arsenal: a rifle, an impulse rifle, a flamethrower and a smartphone. To move between the floors, you can use both the elevator and the ventilation shafts.
‹
›
Home
View web version