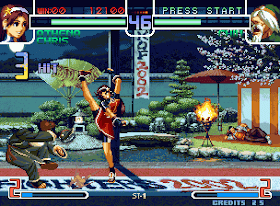 The game system maintains the traditional base of The King of Fighters, with 4 jumps (low, high, fast-low and fast high), race, backdash, dodge and break.
The power bar functions as in the advanced mode of The King of Fighters 98, filling as you hit or pick up. With it you can perform a break, a defense dodge, dodge attack cancellation, enter MAX mode, and make DMs, SDMs, and HSDMs. You can accumulate 3 to 5 bars, depending on how many characters you have (your first has a maximum of 3, the second 4, and the last 5).
When entering MAX mode, your character will have a bar that will gradually run out. The MAX mode allows you to cancel special blows to others by spending part of that bar. You can also cancel a hit on a DM by spending your entire MAX bar + a power bar or with SDM and HSDM by spending the MAX bar + 2 power bars.
DMs, SDMs and HSDMs are respectively acronym for Desperation Moves, Super Desperation Moves and Hidden Super Desperation Moves. Desperation Moves can be executed when you have a special bar. Super Desperation Moves require that you have the MAX bar activated and also that you have an additional bar. For Hidden Desperation Moves, in addition to the same SDM requirements, your character must also have less than 25% energy.

The game was ported to the Dreamcast, where it received the addition of Shingo and King, which can be released through Challenge Mode. The Playstation 2 version brought in addition to the additional characters from the Dreamcast, Geese Howard, Goenitz and Orochi Iori. The Xbox version features the same additional characters, but also has Xbox Live support online, allowing players to tackle each other from anywhere in the world. The Playstation 2 version is known to contain some bugs, such as the bug that during projectile slowdowns, causes the controls to momentarily return to their original configuration.

It is the second non-canonical game of The King of Fighters series, that is, it has no part in the actual sequence of the series history, as well as The King of Fighters '98. It gathers 43 selectable fighters who have participated in the previous games, who join in groups of three fighters and face each other to decide which team will fight against Rugal Bernstein, the first head of the history of this series of games, so always welcome.
‹
›
Home
View web version