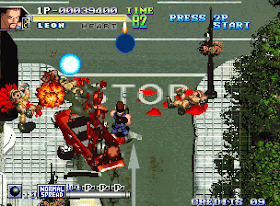 Genre: Action
Perspective: Bird's-eye view
Visual: 2D scrolling
Art: Anime / Manga
Published by: SNK of America
Developed by: Saurus Co.
Released: 1999
Platform: Neo-Geo
The game was produced in 1998 and follows its pre-game Shock Troopers although history follows a whole new stream. Also no characters from the first game appear even scary in the second series. The game is also distributed in its home release version for the Neo-Geo console, besides the Arcade version.
There is not much information on game development. The game is published in Japan and the US, but it is not known whether there is a version for Europe. The executive director is Nobuyuki Tanaka, while the producer is Yasushi Okahara.
The game presents characters and stories of the anime genre.

D.I.C (Dio International Corporation) is a mega known utility for the development of weapons of mass destruction. After billing President Billberk for the reduction of weapons of mass destruction. Nakatomi in charge of D.I.C strongly opposed this policy. This led to open conflict between the President and D.I.C. causing the latter to organize a coup. Military troops spread throughout the state. A new government at the helm of Billberk was declared. Nakatomi exerts pressure on countries to accept the new government or there will be widespread warfare (the claim is based on the existence of a mass destruction weapon). Shock Troopers Team 2 must end the coup within 72 hours. Meanwhile, a whole city turned into a battlefield.

The game is typical of Shoot 'em up. A player or two must find their way between a dozen enemies, trying to get as little damage as possible. The player can choose between four characters each with special weapons and qualities to complete the game. In the player's help comes Power Up (three of which lead to weapon modification / reinforcement) and Bombs (limited force force guns). The game has a total of five movable levels and two alternative levels (after level 1, the player can choose two different paths). The player can also use different machines that are scattered at certain locations of one level. The game also features other special limited weapons.
‹
›
Home
View web version