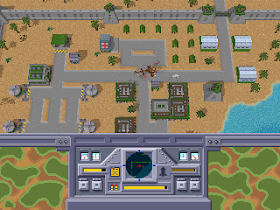 Genre: Action, DLC / Add-on
Perspective: 3rd-person, Top-down
Pacing: Real-Time
Gameplay: Shooter
Add-on: Map / Level, Story / Mission
Vehicular: Helicopter, Tank
Published by: Prolific Publishing
Developed by: Silent Software
Released: 1995
Platform: 3DO Interactive Multiplayer
What will you say about the game, the only essence of which is in the purposeful and pedantic DESTRUCTION, MURDER and COMPARISON WITH THE LAND of numerous military buildings? What about the old - good tactic of the Scorched Earth, so close to the heart of a servant person? What are the thoughts about the innocent Victims crushed by caterpillars? (They are always so innocent) Who has any objections - to fail !!! The remaining - the order: listen carefully, after the briefing - immediately begin to perform the combat mission! Wait. For now.
I-I. Naturlich. Calipers. Igruha is terribly warlike, right up to the aggressive advertising of the Armed Forces - they say, it's enough to play in the spools - it's time to do everything that is done live! Join the Valiant Series of the American Army. Hooray! And those who still prefer spillikins - we say these words: this game of a military-tactical nature is represented by two sidyuks - actually RF and RF: Maps Of Death, abundantly dotted with battlefields, where two very camp-like camps are fighting - Green and Brown. In the version for playing a man against a computer, it's your fate to play for the yellow ones.
So, the Negro war against GREENPEACE! You are in service with a number of combat units of four types - tanks, launchers (rocket launchers), helicopters and jeeps. Simultaneously, you can control only one of them (it's not COMMAND & CONQUER, but something that visually looks like JUNGLE STRIKE); and your mission, as it is written in the built-in help - to break through the barrier cordons to the turret containing inside the Combat Banner Strike; and then - to seize this jersey, and with a victory - home! But a military man, of course, knows that the main thing is a complete and final victory over the enemy, which can only be achieved if it is completely destroyed. And, following the fundamental principles of non-contemporaneity, this subject carries it into life, leaving no stone unturned in the vast territory. Well, why are there tents, as you might ask, to press them with a tank (a very appetizing crunch and a beautiful red blob with a reward will reward you for your service zeal).
And in general all-embracing it looks like this: battlefields are sandy islands, sometimes connected by bridges, and abundantly populated by the enemy. You have a base - an underground something that closes with a heavy door - a latch. Inside - your machines live, and you, choosing one of them - go to battle (in addition, inside the database you can see the map - button B, and the status - the amount of your reserve - button C). The battle is:
- Shooting the main defensive systems of the enemy - wall rocket launchers;
- the periodic knocking down of helicopters and the destruction of their nests (take-off areas on the roofs of houses with large letters N);
- mixing with the sun dried ground of mortal human remains, a second ago unsuccessfully trying to suppress your offensive with the help of hand grenades.
A bit primate - there is no usual variety of missions in such games, but, nevertheless, it's nice to play. Enemies go to military cunnings, arranging forged flags containing buildings, building completely anti-scientific structures from battle towers, or even in an insolent rod with fifteen helicopters to your poor head; ammunition and fuel are in the habit of unexpectedly quickly ending - we have to look for special refueling points .... But the main thing is not this. Visual and sound design - that's what makes the game really an excellent thing. Continuous scaling of the landscape provides an approximation of the removal of the camera, the angle of observation - constantly changing depending on what is happening on the screen, all objects are 3D and catastrophically fine drawn, and ... ALL BATTLE ACTIONS pass CLASSIC MUSIC !!!
Well, that's all, perhaps. Details about the progress of the game, the possibilities of technology and prochii, and prochii - do not make sense, since all this is in the built-in help-razjasnyalka. It is possible to dwell only on particular aspects:
The game does not have a ending, and even after going through all the scenarios at each level, you will not get anything beautiful, joyful and bright - the films about the triumphal march in honor of your victory at the level do not think so. An attempt to launch MAPS OF DEATH without the original original RF source is doomed to failure.

Unlimited means of transportation: This code is entered separately for each vehicle and it must be repeated if using a new card.
Choose your vehicle. Press C to show the panel of weapons and fuel. Press and hold L + R + C. Without releasing these buttons, press and release X. While holding L + R + C, press and hold Down, and then press A. Three light-blue shadows appear on the selection screen of the vehicle.
Game without status bar: To play without a status panel after selecting a vehicle, when it enters a lift elevator, stop the game (PAUSE). This will stall the status bar. Now press A, B or C - you will exit the pause, but the panel will remain stationary.
Immortal life: To find immortality, move the cursor over the vehicle (on the selection screen) and press C. The status bar appears. Now simultaneously press R + L + B + C and hold them. Press and release X - the exit menu will appear. Without moving the cursor and releasing R + L + B + C, press ↓ and A. If everything is entered correctly. You will hear a double beep.
Self-destruction, approach, distance: Self-destruction is achieved by pressing A + B + C. To change the image scale, press in game A + B.

The item "?" In the menu will allow you to understand the designation of objects and the management of equipment. The enemy headquarters can be bombarded with anything, but you can deliver the flag to the base only in a jeep.
The big islands are crammed with flag-headquarters. But the real flag is only in one of the headquarters. To keep the equipment and not storm the extra staffs, remember the location on the map, and then go by helicopter to the far points and try to erase them from the face of the earth - as much as you can. Returning to the base for replenishment of fuel and energy, land in such a way that the shadow from the helicopter coincides with the doors of the bunker, and press the button. Refueling in this case should occur automatically. Now bomb new headquarters - and so until you find the flag. If before the flag is detected you have run out of helicopters, use a tank, then a rocket launcher. Finding the flag, rush to him at full speed in a jeep, you can straight through the water, although it is dangerous - you will be under the gunshot of helicopters and torpedoes of thermal guidance.
Replenish the fuel supply before your transport is permanently destroyed. During the refueling in the bunker, all damages will be eliminated along the way. Using self-destruction (A + B + C), you will sacrifice a vehicle, but this is the shortest way to refuel.
Always check the card at the gas station. It is constantly updated and will show you all the changes around, including - moving the enemy.
Never cross bridges with homing missiles on your tail. First, you will get rid of the rocket, and secondly, it will destroy the bridge behind you. To avoid homing missiles, constantly move. The missiles are launched at the moment of your immobility.
You can not destroy submarines, but you can dodge a thermal missile. If something is closer to the rocket than you, even if it's an enemy, the homing missile will switch to a new target. A bit of practice - and you will learn how to use enemy missiles against him!
Use the radar to track your location, monitor the enemy, prevent the approach of homing missiles, and also to notice mines that are invisible on the map.
Jeep "Beacon" lights a green light and rings when you approach the enemy's flag. When you are in front of your bunker (refueling), the jeep lights a bright red light bulb.
If the enemy found your flag, take the jeep and rush to restore your military honor. You can hide the flag behind the building near the gun turrets. The flag can be moved to the most remote point on the map. The flag can be delivered to your bunker, it will be randomly moved to a new tower. Or it can be thrown into the sea, the waves will gradually kill him back to the shore.
Minimize the bridges needed by the enemy. The wrecked enemy will leave you his equipment, along with the bridge will be destroyed. Minimize the approaches to your flag and to the enemy bunkers. Mines can be destroyed from a helicopter with missiles.
‹
›
Home
View web version