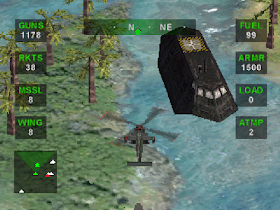 Colonel LeMonde is going to destroy all life on the planet. To this end, he creates a missile with a nuclear warhead, which, when launched into the ozone layer of the Earth, is capable of destroying it. Special services send their agent to Southeast Asia, where the LeMonde base is located. The agent must prevent the villain from carrying out his plan.
The game has some differences from the previous parts. In particular, here the player has the opportunity to alternately manage several combat vehicles (among them - the helicopter Boeing AH-64 Apache and the tank M1 Abrams).

The game process is as follows. The player, controlling any combat vehicle, moves through the levels and destroys the enemies. Each level is given a specific task (for example, to destroy the target or to save someone), after which the player moves to the next level.
Combat vehicles have a limited supply of fuel and weapons, which can be replenished during the level; for this you need to collect special items. The current game statistics are displayed on the game interface. Also here you can see the location of enemies and mission objectives.