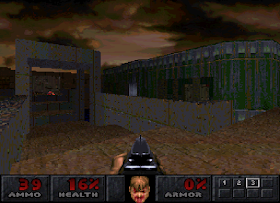 Genre: Action, Compilation, FPS
Perspective: 1st-person
Gameplay: Shooter
Setting: Sci-Fi / Futuristic
Published by: Williams Entertainment
Developed by: id Software
Released: 1996
Platforms: PlayStation (PSX, PS1), DOS
After the appearance of the famous Doom game, its sequel first followed, followed by countless imitations. And here comes its final version (supposedly). At least, its developers - the company Id Software - at one time assured that for computers Final Doom will be the last in a series of classic games in the genre of corridor shooting (FPS). But now we know that this is not so! In particular, in 2000 there was a kind of remake of this game called Doom Forever, and computer owners enjoy the game Doom 3. Well, even if this game is the "last volley", then this volley is deafening! In Final Doom collected 30 of the most interesting levels of 64, included in the computer version. The game has three parts: Master Levels, TNT and Plutonia. In each of them - the longest and most complex levels, and some are so confused that more time is spent not on a shootout with the enemies, but on the search for an exit. In addition, much more emphasis in the game action is made on solving puzzles. It is possible that the newcomers of the game in Doom this version seems too complicated. But even experienced veterans will find in it a lot of unexpected and interesting; these are new elements of the labyrinths (for example, holes in the walls that turn out to be passageways), and hands, legs and other parts of the body that hang from the ceilings (especially at the level bearing the expressive title of "Human Barbecue"), and much more.
Perhaps, some disappointment will befall those who expected to see new versions of the new heroes. Characters, unfortunately, are old, and some of the most interesting monsters from earlier versions, for example, Mankubus and Cyberdemon, appear only for a few minutes.

Pause the game and press X, Triangle, L1, Up, Down, R2, Left(2). Now all weapons, ammunition for them, and keys for the current level will be available.

Pause the game and press Triangle(2), L2, R2, L2, R2, R1, Square. Now all walls and boundaries will appear on the map for the current stage.