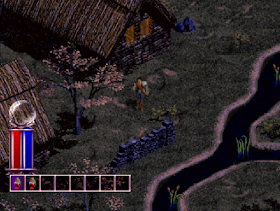 Genre: Role-Playing (RPG)
Perspective: Bird's-eye view
Pacing: 2D scrolling, Isometric
Visual: Real-Time
Gameplay: Action RPG, Hack and Slash
Interface: Point and Select
Setting: Fantasy
Published by: Electronic Arts
Developed by: Blizzard Entertainment, Blizzard North
Released: 1998
Platform: PlayStation (PSX, PS1)
As it should be, Diablo has a storyline, but, unfortunately, it is slightly below the real RPG. However, to get real pleasure from the game, this small flaw in no way interferes. The ultimate goal of the game is to destroy the evil devil. To do this, you need to pass 16 levels, and the blood on them will be flooded in excess! Levels have the ability to recover and re-pass look different. In addition, citizens can offer you minicasts, but not necessarily pass them to achieve the main goal. You can become a Warrior, Archer or Sorcerer. Each of them has characteristic abilities and shortcomings. The Warrior has great physical strength, but his magic never exceeds a fairly low level. With the Wizard, the situation is quite the opposite. In single player mode, the action differs little from the PC version. Just walk around the dungeons and kill everything that moves. The mode for several players is losing something. The version for PC was developed with the expectation of a network game, in which each player has his own screen and complete freedom of movement. The version for PlayStation provides only one screen. One of the advantages of the original version for the PC was excellent music. Fortunately, it remained unchanged. All the features that had a keyboard and mouse, the developers were able to fit into a tiny PSX controller. Basic functions are relatively easy to perform, but more advanced ones require you to either use one key as a "shift key" when you click on another key simultaneously, or act through the menu. However, most players can adapt to this, a little practice.
‹
›
Home
View web version