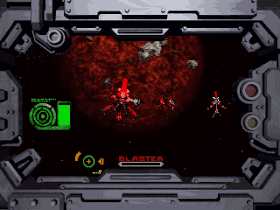 Genre: Action
Perspective: 1st-person
Gameplay: Shooter
Setting: Sci-Fi / Futuristic
Published by: Panasonic Software Company
Developed by: Genki Co.
Released: 1994
Platform: 3DO Interactive Multiplayer
2095 year. Unidentified flying objects attack Mars! To hell with the theory! For the fighter space fighter does not need extra words, the main thing - to charge all the energy modules, so that the laser does not run out in the heat of battle.
Burning Soldier - enough standard space shooter. Turning on the automatic fire passes easily, because the game is very short! Magnificent graphics leave a pleasant impression for the first passing. FMV inserts between levels make the gameplay smooth, without interrupting the fight. Musical accompaniment is selected as it should. Management is somewhat unbalanced - getting into small opponents is one torture. However, I do not want to go through it again. The management of rockets and lasers has not been completely improved, from which I, in principle, did not use missiles. The game for two is much more fun, however, the ammunition is divided equally among the players, so, it must be spent wisely.
‹
›
Home
View web version