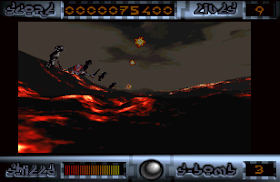 Genre: Action
Perspective: Behind view
Art: Video backdrop
Gameplay: Arcade, Rail Shooter
Setting: Sci-Fi / Futuristic
Published by: Psygnosis Limited
Developed by: Psygnosis Limited
Released: 1994
Platform: 3DO Interactive Multiplayer
3DO, one of those few consoles on which the games of almost all genres are represented, of which only its consumers could dream.
Not a small part of the market for 3DO System games was played by games that used the innovative capabilities of the console - cinematographic shooting galleries and finally escaped to the console in all its glory, FPS.
There were other games, completely sharpened for a new console, well, besides those listed, the usual genres were also represented - races, fighting games, strategies, and many others, including a lot of flyers.
The latter were presented on 3DO in a large number and quite high quality. It was Wing Commander, which received the award of the best game in the genre, in its year of release and Star Blade, striking at that time with graphics and Burning Soldier, surprising music in the style of the early 90's with the strongest solos and the gorgeous Star Fighter, have spent more than one day and more than one night.
There were among them many other interesting games, among which the project called Novastorm was quite prominent.
The game carried the concept of a fairly ordinary arcade space shooter with a rear view of a small-size fighter, but it succeeded enough in developing its ideas on new horizons of 32 bits - this time everything looked serious and beautiful, the game was pleased with the assertiveness and good study of the details of the gameplay.

So, the year of the devil knows what, namely, the 2129th, the future of our civilization, as expected, turned out to be even darker than the past and when an absolutely inescapable danger loomed over him, in the form of a Data Grid supercomputer, to enslave the universe, as in Star Fighter for the war was released kamikaze single in well, very steep star fighter, whose model in this case is called Scavenger 4.
On this I perhaps, in the description of the plot and will be limited, noting only very bad and atmospheric video, which are told about him, presenting us the whole story in the form of gloomy neo-fiction.

Now about the game itself

Graphics pleasantly surprises - the environment is very well worked out, sometimes too much, there were moments when I did not even realize that the cut scene was over and the stage itself began!
In motion, everything looks even better, and during the game, always include beautiful, atmospheric video.

Now as to the sound.

Above the sound series, the authors of the game worked even better than over the visual.
Shots explosions and other effects sound usually, but the music is just magically good.
The present high - quality techno - trance, trance with an admixture of acid and other interesting styles are represented here in compositions composing one of the best soundtracks I've heard.
Sometimes, I even forgot that I'm in the game, the music plunged me into a state of some relaxation eclipsing the gameplay itself, in which I acted as if on autopilot.
And, of course, this music very competently enhances the atmosphere of the game, which builds video and the gameplay itself.
By the way, about this very gameplay, as well as about video, it is necessary to say a little more.
In each level, you fly to the miracle of spacecraft and, shooting back legions of alien invaders, you hope to live to the end.
Somewhere in the middle of the stage, you are shown a video about how your fighter cuts through the landscapes of a given segment of your adventures, then the final spurt follows, and after getting to know the boss.
It is also decorated in the form of a cut scene, like his death in the event of your victory.
The bestiary of local bosses is represented much more diverse than ordinary enemies, which will please you by some number of different types of fighters and bombers.
Then you will be robots walking on two long limbs and cybernetic scorpions, the size of a statue of liberty and huge space stations and the same giant radar.
In general, the developers' fantasy in this aspect of the game unfolded in full.
But to kill local bosses is as laborious as necessary - they are strong enough, they need to shoot at strictly defined places, which are shown to you before the beginning of each level, but the most important thing is that the time for their destruction is given to you very limited and to fly headlong from attacks across the screen trying to catch the fly Achilles heel of the adversary will not be enough, it must be done even in the shortest possible time.
Here you will come to the aid of a super weapon - pressing both the cipher simultaneously leads to a non-frail size explosion that hurts the enemy much more powerful than the usual hit.
The fly's head lies in the fact that for one life you are given only three such shots, and this number of attacks will suffice only for a couple of the first bosses ...
But since we are talking about weapons, let's take a moment to digress to its classification in this work of art.
The fact is that you will start the game with a normal cannon, which, like the others themselves, when you press the button gives a short volley and pauses, so you have to press the button of the shot constantly until nervous tics.
In the course of passing levels, you will be showered with prizes catching which you will restore energy, lost attacks by super weapons and, of course, new types of weapons.
Basically, these upgrades will strengthen your already existing destruction device - add another shot line, making the gun multi-barrel, or giving you for a while, the ability not only to shoot but also shoot down enemies revolving around the fighter with stones or creating a reflection of your weapons, two times increase your lethal power.
But be careful, not every new upgrade will strengthen your armament, there will be those who at the most inopportune moment can return you to a weak initial state.
On this, it is worth trying to remember how those spilling features look at you, which you need and try not to catch those upgrades that will only spoil your picture.

Now back to the video

In addition to those that you will see before the levels, during their passage and before and after the bosses, you sometimes, in especially difficult moments, will be entertained by rollers with a shaking from overloading pilot, who will rotate madly with his eyes, from realizing how he is all- still stuck.
And he really does not feel weak, for the game is hardcore enough and it is possible to set before his start not seven but ten lives, in most cases from an apparent trump card turns only into a means of prolonging the agony of a space fighter pilot.
The greatest role in this, of course, is played by tyrannical bosses, but the levels themselves will not let you relax.
However, this should not frighten you completely from including Novastorm on your console, because this is one of those games of the 90s, for the differences of 3DO version of which from all other platforms, it is not possible not to like our console regardless of what time it costs On the yard and what generations of consoles are currently relevant.
It looks much more beautiful and qualitatively sounds than on the Sega CD and is much more soulful than the more graphically modified version for PS One ...
More soulful, because 3DO is out of time, because 3DO is not just a console, it's a way of thinking, living and the style of this life itself.
Level Select: While playing press 'X' to pause the game. Then hold down LS+RS, then press L,U,U,D,R for a level select.
‹
›
Home
View web version