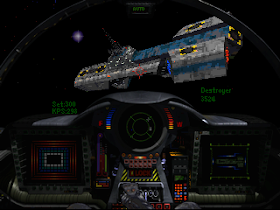 Switch "NVRAM Storage" to Shared and restart emulator. Before swap CD, save state to file, next CD, upload save state file, restart emulator.
Genre: Simulation
Perspective: 1st-person
Gameplay: Shooter
Vehicular: Space Flight
Setting: Sci-Fi / Futuristic
Narrative: War
Published by: ORIGIN Systems
Developed by: ORIGIN Systems
Released: 1995
Platforms: 3DO Interactive Multiplayer, PlayStation (PSX, PS1), DOS
Wing Commander III: Heart of the Tiger is a fun space shooter simulator from the Wing Commander series for Panasonic 3DO. The action of the game, as it is not strange, develops in the distant 2645, the twenty-year war with Kilrathi, which began with the incident of Jason. The forces of the fighting are practically equal, therefore the end of this senseless war is not visible. One of the sides of the conflict is the race Kilrathi, something similar to cats - they are inadequate and extremely aggressive, so they just will not surrender.
We are to act as a Confederate fighter, you are a rookie on one of the most powerful spaceship "Tiger's Claw" of the Bengal class. You arrived just in time, as you are moving into the Vega sector to attack the enemy.
As you probably already guessed, basically we have to fly a space fighter and shoot a lot. You can go through the game in various ways, since the fork of missions is quite large, everything will depend on how you perform the tasks assigned to you.

Your task is to find and destroy the Kilrat armed forces. You can be assigned the following tasks:

Objectives: gathering information about a specific sector, destroying enemy reconnaissance ships, blocking trade and transport routes. It is usually performed in two to four groups. It is important to have a reserve for unforeseen situations.

Objectives: destruction or disabling of enemy strategic objects. Usually, an attack is carried out in the absence or a small number of enemy fighters. Bombers enter the operation after the destruction of the cover ships.

Purpose: protection of transported objects. Destroy all detected enemy ships, except for the base ones.

Purpose: Destruction of enemy fighters. Perform the operation in two or four groups. A reserve for unforeseen events is important.

Purpose: support for the advanced forces of the Confederation. Since the base ship is used as a base for fighters of other ships, it is very important to prevent possible penetrations of the enemy into the sector of the operation.

Purpose: acting in the rear of the enemy, to divert his attention from the main forces of the Confederation. Distractive maneuvers are conducted without the participation of the main forces.

Objectives: to protect the fleet from massive enemy attacks, to protect the main ship from missiles, etc. The task of each group participating in the operation is reduced to the destruction of missiles or fighters and in the call of fire to themselves.

During the bout, it is very important to maneuver well. Carefully learn all the techniques so as not to lose the enemy from the field of vision and dodge his fire. Find on the dashboard commands such as shooting, contacts with the enemy, etc. (are called together with R or L).

When you are on the screen with the inscriptions "New game". "Load game", "Continue", press and hold L + P. Now position the cursor on "Continue" and press A. The debug menu should appear. It is especially useful to choose the item "Finger of death" (death by a wave of a finger). To use the acquired features, select the target in flight and press X and A when the missile flies. Keep in mind that this method destroys both enemies and friends.
‹
›
Home
View web version