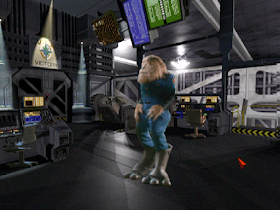 Before swap CD, save state to file, next CD, upload save state file.
Genre: Simulation
Perspective: 1st-person
Gameplay: Shooter
Vehicular: Space Flight
Setting: Sci-Fi / Futuristic
Narrative: War
Published by: Electronic Arts
Developed by: ORIGIN Systems
Released: 1996
Platforms: PlayStation (PSX, PS1), 3DO Interactive Multiplayer, DOS
During Wing Commander III video sets you choose where to go and with whom to communicate. By scenery, costumes and filming Wing Commander III can be compared with a good Hollywood movie (later, indeed, a film was produced based on the game. The game has a wonderful set of actors, including the famous Malcolm McDowell as Commander Tolvin and Mark Hamill in the role of Christopher Blair.
As in a good movie, the Wing Commander III storyline is carefully thought out, and the game is kind of like an interactive soap opera: You need to save a French girl (by the way - your fiancée) that the hated Kilrathi (Kilrathi, cat-like humanoids) keep together with their other captives. Fortunately, the game, unlike Daedlus Encounters is not limited to interactive cinema. The main thing in Wing Commander III is the execution of tasks to combat space villains. During tasks, you control a spacecraft with complex control, which takes time to learn. With complex tasks, the option to save the game is just as convenient. 3D graphics give a completely realistic feeling of flight, and colorful explosions complete the picture. The image in the circle changes smoothly, but with a very strong approximation to other objects, there are significant graphic flaws. Wing Commander III with numerous video fragments and realistic space flights, as well as a great script - a very valuable addition to the PlayStation library of games.
‹
›
Home
View web version