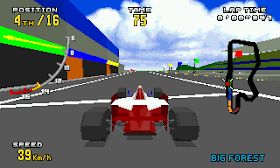 Genre: Racing / Driving
Perspective: 1st-person, Behind view
Gameplay: Arcade
Published by: SEGA of America
Developed by: SEGA Enterprises Ltd.
Released: 1994
Platforms: SEGA 32X, SEGA Genesis / Mega Drive
Legendary arcade racing, performed in polygonal 3D from Sega. The first version of the game appeared on the SEGA Arcade machine in 1992. The game was waiting for a dizzying success. In 1994, the Virtua Racing game appeared on the 16-bit Sega Genesis / Mega Drive console, after which, in the same year, the extended version of Virtua Racing Deluxe for the Sega 32X game console was made. The game was significantly improved, there were two new Stock and Prototype cars and two new tracks. You have the opportunity to participate in races on the similarity of formula one. Or on other machines. The game has a large number of modes, including a two-player game. Your main goal in the game is to be the first and the best.
‹
›
Home
View web version