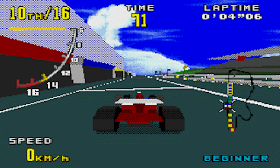 The game is a 3D simulator racing "Formula 1", ported from the Arcade machines Sega Model-1.The player is available three ring routes with different difficulty levels of the route:- Big Forest: easy trail;- Bay Bridge: the middle route;- Acropolis: a complex route.Depending on the complexity of the game (easy, medium and hard) in the single player mode, the player is given a different time limit for the circle (80, 75 and 65 seconds, respectively).When passing circles, the player must be able to cross the lines of check points, replenishing the time reserve. Did not have time - you hear minor samples and you see the current statistics.In the single player mode, 15 computer opponents compete with the player, whose cars look the same and differ only in color.Winning on all routes in a complex mode opens the "mirror" tracks, that is, on the already passed tracks one can run in the opposite direction. A similar technique was used in the pilot Ridge Racer in 1994. For 32-bit Sony Playstation.Polygonal world "Virtua Racing", demonstrating its fundamental superiority over the old-fashioned scalable sprites, allows you to choose 4 points of view for your car and for objective reality around: 1) the view from the cockpit; 2) the rear view from above from the third person 3) the view from behind from the top at a considerable distance from the car 4) the view from the height of the bird's (or almost) flight.Personally, I found the most convenient point of view number 3, and the most spectacular from the aesthetic point of view - № 4! Although tunnels and bridges sometimes look steeper from other, more "mundane" points of view :)."Virtua Racing" also allows you to play together in Split-screen mode, displaying the pictures of both players on the screen simultaneously, dividing it in half horizontally.What do we have with the management? Control the beast! Having tasted a lot of sprite races of the 8- and 16-bit world, I believe that the polygonal "Virtua Racing" offers a higher level of interactive interaction and management viewpoints. Up to full-fledged 32-bit polygonal races, of course, is far away, but in 16-bit format I did not see a clearer feedback from the interaction of the car and the route. And it should be noted that awareness of this feedback does not come immediately, you need to roll a few hours before you feel the depth of the game mechanics. In part, this is due to a low frame rate on today's standards, but it's worth it!In addition, it should be said that an automatic or 7-speed manual transmission of an iron horse is available to the player (O Gods! Who in this furious race manages to control with a Manual Transmission.Innovative gameplay, I, as a veteran of 16-bit battles, rated 5 points out of 5!

Yes, this is a completely 3D race with polygonal graphics on the prefix Sega Genesis. Despite the fast 7.61-MHz CPU, the 16-bit veteran was not able to handle several thousand polygons per second, so a 23-MHz SVP (Sega Virtua Processor) 23-MHz RISC coprocessor with a capacity of 9,000 polygons per second came to the rescue. SVP-coprocessor in 1994 proved to be a very effective solution for Sega Genesis, superior in performance to the legendary Super FX on Super Nintendo. This allowed to bring the 16-bit system to a new technological level, in fact invading the "sphere of influence" of 32-bit systems originally grounded under polygonal graphics.The only, but unfortunately, decisive drawback of this magnificent coprocessor was the cost of the final product: cartridges with the game "Virtua Racing" were sold at $ 120, which was twice as expensive as good 16-bit games and exceeded even the cost of CD-games for 32-bit Super-prefix of the time - Sony Playstation, Sega Saturn and Panasonic 3DO!In the game in 3D graphics, all the objects are executed: from the F-1 car and the personnel at the pit-stop to the tracks, hills, bridges, stands and other objects. Even the sparks and fire of the exhaust pipes are polygons! All this is beautifully combined with the texture of the sky and clouds, hovering somewhere in an unattainable background.Thanks to a competent game design, the 16-color palette of 3D graphics in this game does not bother at all. But there is a moment - the insufficient number of colors available to SVP, necessitated the use of dithering (alternating pixels of different colors), and at a low resolution of 3D graphics this is slightly disorienting in a rapidly changing traffic situation. However, after a multiple run through the track on it no longer pay attention and completely immersed in the gameplay.Separately, it should be noted such details as road markings, smoke of rubber and black stripes from the wheels of sports cars! And the yachts on the polygonal sea, and the horse at the pen ... Such details in the conditions of a shortage of productivity are especially bribing.Incredible level of graphic execution, only 5!

Musical accompaniment? For amateurs! I'm kidding, of course, but there are no permanent musical compositions throughout the entire track. However, this or that short encouraging motive is launched at each intersection of each checkpoint. And since checkpoints meet regularly, you spend half the time in musical accompaniment. The rest of the time, you listen even more tensely to the roar of the engine and peer into the pixel horizon of the events :) I would rate the quality of the performance of musical jokes by 4 points out of 5 - on the one hand decent major motives, on the other - we heard compositions and more abruptly, in that «Vector man»!Sound effects are quite decent, the sounds of motors racing cars, braking or slipping tires, driving to the lawn and the like create an atmosphere of intense struggle. And quite complicated for Mega drive synthesis of speech here, too, was quite good, at least quite distinct "Three, Two, One, Go!" At the start or "Time bonus!" At check-point.In short, the voice acting gets a solid 4!

Personally, in my opinion, it was necessary to start implementing such an expensive solution from such projects as "Doom" or "Wolfenstein", capable of breaking almost any price line. Still, the simulators Formula-1 less audience than the fans of 3D action games. Moreover, Mega Drive produced "normal", but very decent F-1 races, sold by the native iron, for example, Indy Car or F-1 Nigel Mansell. Of the 3D action games, mention is made only by the slow ¼-screen Zero Tolerance. But after the release of the same "Doom", having paid off the SVP and waiting for its cheapening, in 1995 it was possible to implement "Virtua Racing", "Virtua Fighter" and other bold Experiments for a modest 16-bit Sega. Even the spirit captures when you think about what could come out on the Sega Mega Drive, get yourself SVP on this platform in due time!Today, the game is of interest only to fans of the platform, since even compared to the same "Ridge Racer" for the first Sony Playstation, the visual series contains dozens of times less polygons and looks schematic.And yet this is a completely unique project for Sega, which allowed a 16-bit platform to demonstrate fast polygonal graphics.
‹
›
Home
View web version