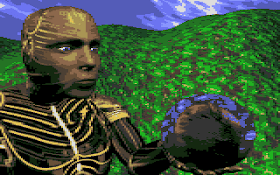 Genre: Action
Art: Full Motion Video (FMV)
Setting: Cyberpunk / Dark Sci-Fi, Sci-Fi / Futuristic
Published by: Time Warner Interactive
Developed by: Sales Curve Ltd.
Released: 1994
Platforms: SEGA CD / Mega-CD, SEGA Genesis / Mega Drive
Unusual game made the film The Lawnmower Man, based on Stephen King's short stories. The game is an assembly of mini games, designed with interactive 3D videos. The plot of the game tells one very interesting story. Dr. Lawrence Angelo - scientist working at the Virtual Space Industries in Project 5. This is a secret experimental setup that, with the help of psychotropic drugs and virtual reality, increases the intelligence of primates. Dr. Angelo refuses to use research for military purposes, and after one of the chimpanzee escapes and shoots the guard, Dr. Angelo give a forced vacation. Wanting to make an experiment on man, he is a simple boy Jobe Smith who makes his living by odd jobs, such as for example mowing the lawn. He exposes this guy to compulsory treatment, and after several sessions, the guy's intelligence is significantly increased. But after an accident, he has to stop the experiment. The secret organization "The Shop" watching the experiment "Project 5" repeatedly pumps the guy with drugs, speeding up the treatment. Joubs develops telekinesis and he wants to take revenge on all those who offended him before the experiment. In addition, it develops so much that it plunges into the virtual world and takes over all computers in the world.
The game is a collection of mini-games in revolutionary virtual reality. You also play for Pierce Brosnan and confront Job's cybernetic genius. We need to adapt to the world that Job creates.
Although the game also flaunts impressive visual effects, in fact - it's not generated graphics, but a pre-recorded interactive video.
Interesting and casu situation turned out with the release of the European version of the game. It was mistakenly released with the American region, that is, the disc could not be defined in the European consoles. The discs were later recalled, but the normal version was not released. So, Lawnmower Man for the European region is considered one of the rare games.
There was another version for DOS - Lawnmower Man 2: Cyberwar.
‹
›
Home
View web version