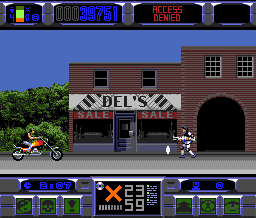 Genre: Action
Perspective: 1st-person, 3rd-person, Side view
Published by: Time Warner Interactive
Developed by: Sales Curve Ltd.
Released: 1994
Platforms: SEGA Genesis / Mega Drive, SEGA CD / Mega-CD
I hope you watched the movie of the same name. And if so, then you just could not miss the numerous inserts of computer graphics. For those who are in the life of a gamer, sorry, GAYMER, they are also close, like Sonic for Sega. Raging flights in cyberspace from any player will cause copious salivation. There is something to envy. Why, in our century of multimillion investments in computer technology, virtual reality remains only a dream subject. Really complete freedom of action in the computer world will remain the privilege of only the heroes of movies. But in fact, maybe this is for the best, even if we will be satisfied with Segov masterpieces, such as, for example, this one. Virtual reality is an unconquerable element, but it will always be fought for. And here in the game market there is a new cartridge, which brings us closer and closer to the discovery of mysterious computer worlds. So, the LAWNER.
As you probably already know, a kid named Job was mowing lawns from people. So a boy, one wind in your head, and only. Uncle doctor in his childhood diagnosed, mental inferiority, it seems. That's how the guy lived, did the only thing he liked and knew how. Mowing and mowing the grass, did not bother anyone until another uncle, his client, looked at the poor fellow. The peasant was called Dr. Angelo, he conducted experiments with the Virtual Reality, and quite successfully. His experimental at first was a chimpanzee Roscoe. The monkey from the game of games incredibly increased intelligence, the animal clever by leaps and bounds. Then Angelo realized: "Why do not I put experiments on animals, you can not make people out of them, maybe I can teach this schizophrenic that she's cutting her hair." Suddenly a man will be. "
Lawnmower Man lip is not stupid, he also adored the game, so gladly agreed to the offer of the doctor. For free, as is known, and vinegar is sweet. As time went by, Virtual learning worked wonders. But I did not know Dr. Angelo that his technique had a side effect. The brain sooner or later does not withstand the information attack and gives the oak, causing manic-depressive aggression. Roscoe was the first to go off the chimpanzee. He somewhere got a gun and, imitating cowboys "Haggis", began to fool with all the fool for people. The poor fellow had to be eliminated, for security reasons. The doctor thought for a long time about the cause of the monkey raids, and when it came to it, it was too late. Poor Bed Job was so wrong that he penetrated the international Internet and became a threat to all mankind. You in the role of Dr. Angelo or his friend Carla must find the insidious Cyber-Job. You can correct the mistake of the doctor only you. The game combines two game styles, mostly they alternate with each other.

Forward and only forward. The brake button can not be searched for, it simply does not exist, and it does not need it. Weak-hearted let the cartoons are watching, but we give SUPERHOUSE! Yeah, the speed here - the spirit captures! In passing, you will have to shoot virtual enemies, dive into small arches, maneuver between vertical and horizontal beams, aim at full speed in tiny balls - opening doors. The main thing is to live up to the inscription EXIT. In short, virtual worlds will add to you a lot of hassle, nerves and adrenaline liters.

Standard side view. These levels are easy enough. They exert such a relaxing effect from the aforementioned freaks and serve to enrich lives. But do not think that everything is so simple: detachments of soldiers, snipers in sewer hatches, helicopters and robots - all are hungry for reprisals. And as for the lives, they have to be looked for, for example, by shooting boxes or tubs with plants. And most importantly, there are at certain levels some computers, entering into which you need to solve five puzzles. Breaking this way the terminal, you get a mountain of prizes. A few words about the bosses. They are simple as babies (except Job, of course), their tactics are unraveled from the very beginning of the battle and do not pass them simply ridiculous. Another thing, the last, schizophrenic with megalomania, to score this scab is terribly difficult. Before you is a gigabyte, a gigantic head, hovering around the gates, protecting seven entrances to the global Internet. The battle takes place in a virtual space where there are no restrictions in movement, you can fly around the screen and give the scoundrel portions of lead. He, in turn, ryples fireballs and lets ring of fractions from eyes. All this good at every hit blows you away from the battlefield, from which the stock of lives insidiously decreases. Destroy Cyber Job can only be closed portals, but the enemy will constantly interfere, obscuring them. Do not worry, peal around the demon, until he becomes exhausted and flies away to fill up with energy, thereby leaving the portals unprotected and, consequently, making his incompetent but threatening essence vulnerable. Fool, what to take from him.

Playing on one of the "platform" levels, click on the pause and type: up + right + A + B + A + down + left + A + down. After that, click on start. Now, once again press Pause and pressing button B, you jump to the next level; If you press the C button, a secret menu appears before you; If you press A + B + C simultaneously, you will be able to select any level.
‹
›
Home
View web version