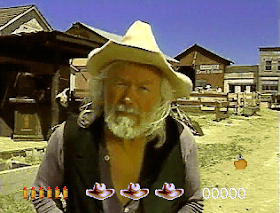 Genre: Action
Perspective: 1st-person
Gameplay: Shooter
Art: Full Motion Video (FMV), Live action
Setting: Western
Published by: American Laser Games
Developed by: American Laser Games
Released: 1994
Platforms: 3DO Interactive Multiplayer, SEGA CD / Mega-CD, DOS
Mad Dog McCree is the first game in the series, and the first game released by American Laser Games for a Light Gun. The game tells us a story that occurred during the time of the cowboys in the wild west. This is a western in which we have to shoot at the bad guys, while trying not to catch the civilian population. A gang of Mad Dog McCree kidnaps the mayor of the city and his daughter, while the sheriff is locked in his own prison. To begin, we have to get the keys from her, pulling them out of the dead hands of one of their criminals, nicknamed One-eyed Jack. In the end, you get to the mine, that would release the measure and his daughter, while not forgetting about the main villain.
The two-player mode is supported, playing in the company is much more interesting. You can also practice shooting by shooting bottles.
‹
›
Home
View web version